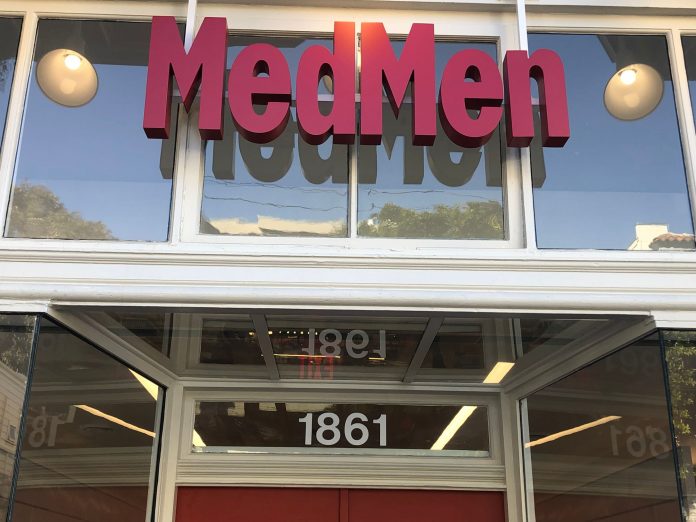 The Biggest Cannabis Dispensary Chain Yet to Arrive in SF, MedMen, Opens Store in Cow Hollow

San Francisco does not really have any big, national cannabis dispensary chain stores with Starbucks-style saturation presence. The city’s famed aversion toward formula retail has kept out most of the nation’s largest legal marijuana retail chains until now, like CuraLeaf, Trulieve, and MedMen. The biggest “chain” retailers here are regional players like The Apothecarium, Stiiizy, and SPARC, with two or three stores in town, and little if any national profile.

But big national chain-store marijuana retailers are indeed a thing. A chain called Trulieve is the largest dispensary chain in the U.S. with nearly 150 dispensaries across 11 legal states. And the former largest chain marijuana retailer in the country, MedMen, once had 78 dispensaries in 12 states, and was hailed as “America’s first $1 billion marijuana ‘unicorn.’” This was back in the early days of legal cannabis, when venture capital deals were growing like weeds, and it was widely assumed that everyone in the recreational marijuana game was certain to get stinking rich.

Less than two years later, MedMen has been trimmed to only 30 dispensaries. But they just opened their first SF location Monday morning on Union Street in Cow Hollow, after its first year of blockbuster, billion-dollar growth crashed in a stream of scandals, lawsuits, and unpaid bills that left the company such an industry punching bag that MedMen jokes were a running gag on South Park.

MedMen has since cleaned house, removing its jet-setting and wildly spending previous executive team, and financially restructuring by selling off huge numbers of dispensaries while opening small, targeted dispensaries in the most lucrative markets. It’s unclear whether the turnaround will work; their stock peaked at $6.49 a share on the Canadian exchange in late 2018, and is now trading at 11 cents. The company also has plenty of reputational damage to undo, and the SF store is part of not just a financial restructuring, but a philosophical one too.

“People understand that corporations are like people,” MedMen SF’s co-owner Malcolm Joshua Weitz told SFist, shortly before the store’s Monday opening. “Yes, there’s some stuff that has gone on before that is not necessarily in my control. People, or any corporation like MedMen, have the opportunity to do better. I think this is that opportunity.”

Weitz is a local, a Mission District native who ran the Mirage Medicinal delivery service back in the medical marijuana days. He’s the local MedMen store’s “equity” co-owner, meeting a local requirement that stores have some degree of SF ownership by people who were victims of the Drug War. Weitz did time in prison for transporting and selling cannabis, and his father was imprisoned for the same. “He ended up at Rikers Island also, which is the craziest thing, a father and son there,” Weitz laughs. “I thought ‘Whoa, am I going to have to beat someone up in the shower to protect my dad?’”

Weitz explains that a local, independent operator pretty much has to partner with a large company to open up shop in San Francisco.  “Essentially, it’s access to capital,” he says, noting that you have to pay rent on the space all through a years-long approval process, with no access to banking loans because of cannabis’ federally illegal status. “In a city like San Francisco or L.A., you’re talking about a sum cost of a million dollars by the time you open your door, and that’s not including the product.”

This MedMen is technically Cow Hollow’s first dispensary. There is a tie-dyed place nearby called Transcend which sells “CBD Organic Hemp,” but not the dank shit you’d normally blaze up. And the store interior is unusually upscale for a dispensary, with iPads on the counter to teach you more about your weed strains, and a contraption that allows you to smell the product without removing it from a container. (This being San Francisco, there is a theft-proof cord on the device.)

Now that MedMen has arrived in San Francisco, they instantly become the biggest retail cannabis brand name in town. No other pot retailer in SF has nearly as many stores nationwide, even if SF has only one MedMen store. But we won’t have just one for long. A Union Square area shop at 532 Sutter has won City Hall approval, and is expected to open later this year.

So MedMen’s future looks bright locally. The question is whether the national parent company can survive the lawsuits and debt that have left its fiscal health looking a little hazy.

Facebook
Twitter
Pinterest
WhatsApp
Previous articleApple Says It Has ‘Paused’ Product Sales In Russia, But Resellers Are Still At It
Next articleUber To Gouge You With New Gas Price Fee Now That The Oil Industry Is Gouging You