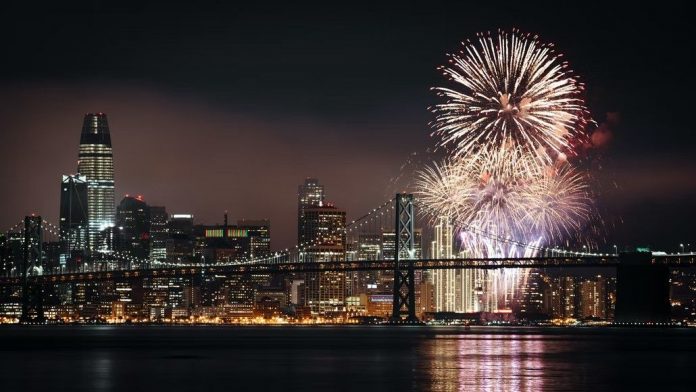 More than two dozen fireworks technicians from a company called Pyro Spectaculars are setting up SF’s July 4 display as you read this, and their boss opens up about how his Rialto-based company will execute nearly 400 fireworks shows nationwide this weekend.

It’s been an open secret for years that most official (legal) California fireworks shows are handled by the same company. That company is the 100-plus-year-old Pyro Spectaculars, started in the early 1900s by Portuguese emigrant Manuel de Sousa, and now run by his great-grandson Jim Souza, and still a family business that pretty much employs all of his kids. Jim Souza gave the Bay Area News Group a lengthy interview heading into July 4 weekend, as his crew of about two dozen are currently setting up the San Francisco show at a boat off Pier 39, one of hundreds of fireworks shows the company is handling over the next four days.

1. Take transit. Muni and BART will have extra service this Monday.
2. Leave it to the professionals. Fireworks are illegal in SF.
3. Dress in layers! Temperatures can drop quickly after sunset.
4. Avoid drinking and driving.
5. Park smart. Don't leave valuables in your car.

“We’ve got 400 shows this weekend,” Souza tells the new group. “That represents 400 permits, 400 insurance certificates and 400 crews of pyrotechnicians that are getting ready. Trucks are being loaded to be distributed to the various shows.”

Join us for the return of the #4thofjuly celebrations!#independenceday festivities return with the @sfgov official fireworks display 🎇 at @Fishermanswharf, it all starts at 9:30pm.

Click link for all the details and recommendations: https://t.co/ArQf3rj0ST pic.twitter.com/d3cYJnlZat

San Francisco did have a 2021 fireworks show, though many communities did not. The shows are basically all back now, but COVID-19 still changed the professional pyrotechnics industry.

“Coming out of the pandemic, we have a lot of price increases,” he says. “Insurance has gone up 20% to 30%. Manufacturing costs in China and in Europe have increased significantly. Chemical costs, for raw materials, are skyrocketing. Shipping costs have gone up from $10,000 to $30,000 a container. There’s the constant struggle with the supply chain, causing delays of shipments and cargo.”

Okay let’s get to the industry secrets! How do they create those colorful displays?

“Strontium will give you some red colors. Barium is going to give you green. Copper is blue,” Souza explains. And of the sparkly, glitter-dazzle fade effect, he says “It’s magnalium — a combination of magnesium and aluminum. When these metallics burn, they create sparkle.”

And yes, there have been horrible accidents over the years.

“My father was injured in 1969. He lost mobility in one of his hands, and one of his partners lost a hand,” Souza says. “He proclaimed that we were going to move everything into electronics. And we have done that.”

watching the faint glow of fireworks through a hazy wall of fog, a San Francisco 4th of July tradition unlike any other https://t.co/K0PYVzZUHY

The San Francisco pier fireworks show is scheduled for 9:30 Monday night. According to a city announcement, “Fireworks are best viewed from the Hyde Street Harbor and Fisherman’s Wharf area. Other public areas to watch from include PIER 39 and the Pier 43 walkway.”