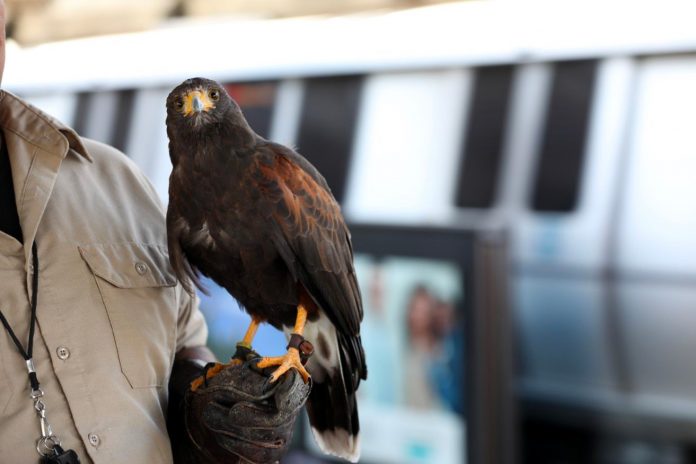 A hawk who has been given the name Pac-Man is patrolling the area around the El Cerrito del Norte Station, thanks to a contract with a falconer in what’s sort of a last-ditch effort — after many failed attempts — to control the pigeon population there.

“Over the years, BART has taken numerous steps to mitigate the pigeon population at the station,” BART says in a release. “Hundreds of bird-repellant spikes and netting can be seen fastened to ledges, pipes, fare machines, and other surfaces in the station, which received a total makeover in 2021.”

“We brought in owl statues, we tried nets, we tried various measures with noise. We did quite a bit to see how we could gently move them along,” says Wahid Amiri, the project manager for the El Cerrito del Norte Station Modernization Project, which concluded last spring. “Nothing was successful.”

So, enter Pac-Man. He’s an adult male Harris hawk, and he comes to BART thanks to La Crescenta-based contractor Falcon Force. Pac-Man and handler Ricky Ortiz come to the station three days a week for eight hours each time, offering “bird abatement services,” hoping that the swarms of pigeons at El Cerrito del Norte Station at some point get smaller or go away.

“Hawks such as Pac-Man are natural-born predators and their presence alone deters prey birds, like pigeons,” BART explains. “Walking the station with Pac-Man, Ortiz merely has to lift the bird in the general direction of a sitting pigeon for the bird to flap away hastily.”

So, it’s not a pigeon massacre every day in El Cerrito. The hope is that the pigeons begin to associate the station with being the hawk’s territory — and the bird is given other treats throughout the day to tide him over, including rodents and rabbits.

“Trapping works to an extent, but you can only trap so many,” Ortiz says. “A bird of prey works really well. When the pigeons see the predator, it’s instinct for them not to want to be around.”

Also, Pac-Man is apparently very good at this work, doesn’t really mind the crowds at the station, and train noise “doesn’t even faze him.” Harris hawks have been known to roost for years at a time in urban locations.

“These birds are used to hustle and bustle,” Ortiz says.

And yes, in case you didn’t instinctually know this, pigeons are disgusting.

“Pigeons are non-native, non-migratory, and invasive,” BART says. “Their droppings can carry bacteria, fungal agents, and ectoparasites that can impact humans.”

The station gets cleaned every morning, but less pigeon poop and general pigeon nastiness is the goal.

El Cerrito del Norte’s pigeon problem goes back a couple of decades, but it isn’t the only station that’s plagued with the birds. As the East Bay Times reported back in 2004, Union City, Mission 16th Street, Balboa Park, Colma, and Daly City stations also have had historic pigeon issues, and bird-of-prey soundtracks have been used to deter them there. So maybe if Pac-Man’s efforts are successful, he’ll be deployed elsewhere in the BART system.