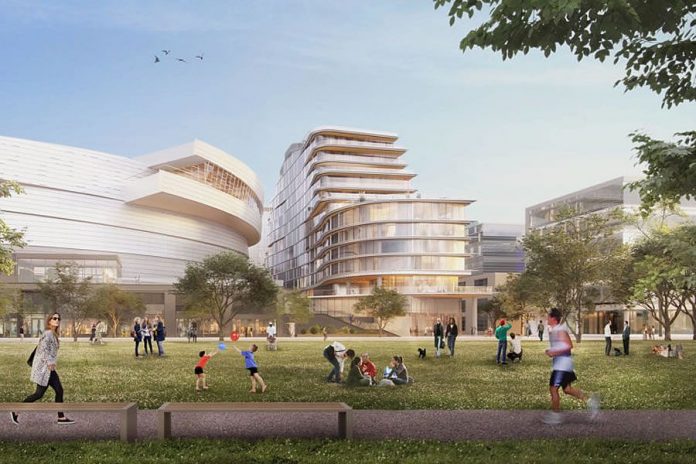 Is the COVID-19 era really the best time for a cruise-ship themed hotel and condo project? Perhaps the Warriors are having second thoughts, as they just announced this very strange Chase Center add-on is “indefinitely delayed.”

I admit that I did not know until today that the Golden State Warriors were planning to build a hotel-condo onto the Chase Center. And had I known this, I would have been making cruise ship jokes about it, because according to the San Francisco Business Times, it was going to be “Shaped like a cruise ship and facing toward the bay.” Is a cruise ship theme perhaps the wrong idea for the times, considering the notorious role cruise ships played as COVID-19 superspreading vectors in the early days of the pandemic?

Then again, maybe it’s fine, because the hotel aspect of this thing would probably be primarily for visiting-team basketball fans who are unlikely to give a tinker’s cuss about travel-related public health risks. A rendering for the project is seen above (it’s in the middle), but maybe the rendering is all we’ll ever see of this thing. Because that San Francisco Business Times report I mentioned is a report that the Chase Center hotel-condo, originally slated to open next year, is now “indefinitely delayed” with no timetable for breaking ground.

The full quote comes from Warriors President and COO Brandon Schneider, who responded to a Business Times inquiry about the project by saying “Again, the project has been delayed indefinitely, so nothing has changed here.”

The Board of Supervisors approved the hotel-condo in July 2020, according to the Chronicle. But even if this thing is never built, it’s not exactly a huge blow to the housing stock supply. It was only slated to have “21 condos” in addition to nearly 130 hotel rooms and 12,000 square feet of ground-floor retail.

Should this whole thing get momentum and start up again, the hotel would be operated by SH Hotels & Resorts, who handled the renovation of the former Hotel Vitale, now operating as 1 Hotel San Francisco.