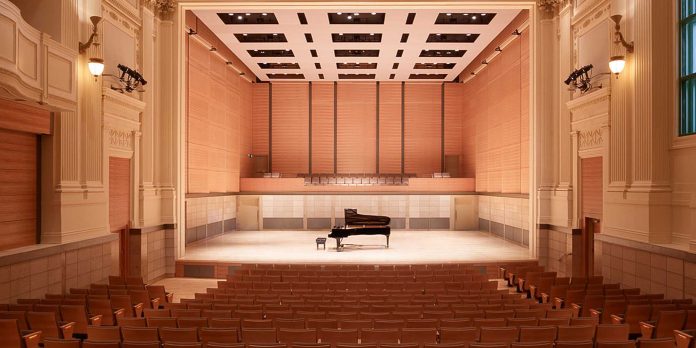 The SF Conservatory of Music Has Bought Itself a Record Label

Classical music has enjoyed something of a surge on streaming services during the pandemic, but the major record labels like Universal and Sony have been cutting back their classical music offerings for years. The local prestigious music school the San Francisco Conservatory of Music (SFCM) seems eager to fill that void, as ABC News reports the SFCM has acquired the Netherlands-based label Pentatone Music, and will work the SF Symphony and other classical music artists into its repertoire.

Pentatone Music most recently won the 2019 Grammy for Best Opera Recording for The (R)evolution of Steve Jobs, and won several Grammys for 2017’s Ghosts of Versailles.

“Bringing Pentatone in-house creates an extraordinary backdrop to explore new ideas for performing, recording and distributing music,” SFCM president David Stull said in a press release. “For the first time, professional artists have access to a research and development engine in the form of SFCM’s students and Pentatone’s skill and creativity producing musical experiences of quality and enduring importance.”

The label is based in Baarn, Netherlands, and per the press release, “will continue to operate as an independent company.” The release notes that Pentatone’s “artists now have access to SFCM’s state–of–the–art recording studio,” though given the 5,000-mile distance between the two cities, it’s not yet clear how that will work.

One of their first projects will be recorded here, though, at Davies Symphony Hall. Per the release, SF Symphony director Esa-Pekka Salonen will conduct the National Brass Ensemble Academy in a new commission by Emerging Black Composers Project winner Jonathan Bingham. The release does not note a date, but from what we can tell, that all seems to check with a Monday, June 20 performance at Davies.