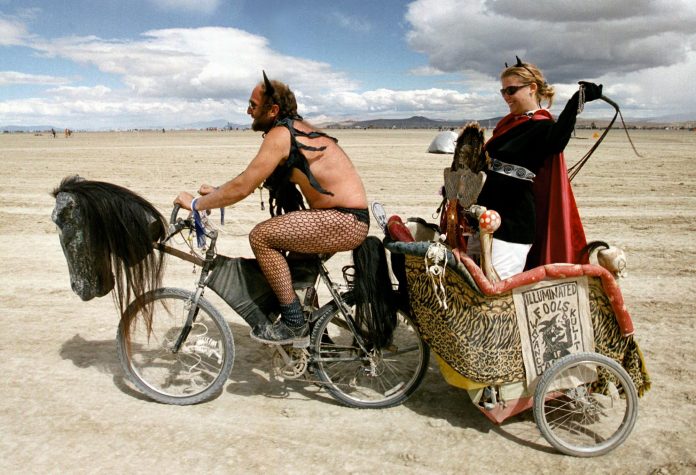 Washoe County commissioners are in discussions to add an extra fee onto Burning Man tickets to maintain a stretch of road that 70,000 Burners tromp across every Labor Day weekend.

Bay Area people who attend Burning Man know that the directions are pretty easy. You take I-80 east all the way until you get to Fernley, Nevada, and then hang a left at Love’s Travel Stop, and Route 447 will take you pretty much all the way to the event. The week of Burning Man is when that Route 447 sees vastly, vastly more traffic than any other time of year on the fairly remote, rural road.

Washoe County commissioners recently expressed support for imposing an impact fee or surcharge on Burning Man tickets to recoup some of the costs to maintain infrastructure. @BenMargiott has the details in this report. https://t.co/TWtFd9Ovd4

“I’m not looking to burn the house down with them or gouge them,” commission chair Vaughn Hartung said at the commission’s April 26 meeting. “But like we do with a lot of things, we impose impact fees. When you build a house, you pay a regional road impact fee. It’s just a matter of maintaining the road for them and for their event so that people can get in and out safely, and they’re not dealing with worn roadways.”

There was no formal proposal before the commissioners, nor a dollar amount discussed. In fact, the matter was not even on their agenda, it’s just a conversation that was struck up over the course of the meeting. But Hartung said, “I do want to bring this back,” and there seemed pretty much unanimous support among the commissioners.

“I can’t imagine they’d have any problem putting a surcharge on a ticket,” commissioner Kitty Jung said. “They basically print money. There’s never been a day that the tickets didn’t sell out within hours of any price you put out there, because it’s so beloved.”

Jung is correct on the point that Burning Man tickets always sell out right away (this year it took but 29 minutes). Surely the Burning Man Project would argue they are not “printing money,” they’ve actually encountered financial problems after two years of COVID cancellations. But they are getting better at monetizing their top revenue demographic, and certainly nobody blinked that tickets were $100 more expensive this year than the event’s most previous official iteration in 2019.

I myself have driven that road many times, and back in the late 1990s, it was basically just a glorified dirt road. It is in far nicer shape and easier to drive these days (albeit still peppered with 25 and 35 mile-per-hour speed limits). There is also the issue of whether Washoe County can do this, as Route 447 is a state route for portions, and a county route for others. But given the seemingly inelastic demand for Burning Man tickets, there seems a good chance that the Burning Man Project and Washoe County will come to some sort of arrangement without a big dust-up.

Image: A dominating woman gets a chariot ride across the playa during the15th annual Burning Man festival September 2, 2000 in the Black Rock Desert near Gerlach, Nevada. Despite high winds, dust storms, and a bit of rain, some 27,000 people camped out on a remote desert playa, or dry lake, for the week-long counter-cultural celebration of art and “radical self-expression.” This year’s theme was the body. (Photo by David McNew/Newsmakers)