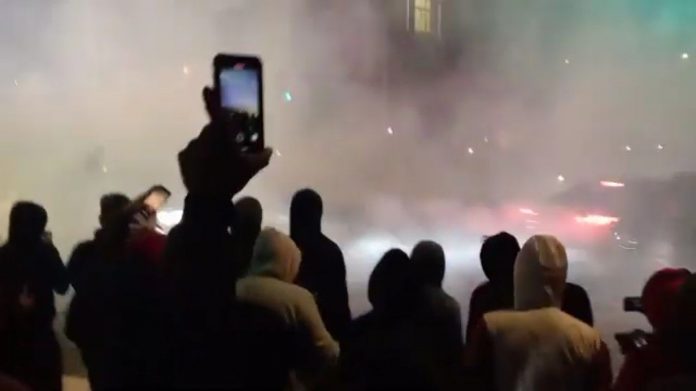 There were no reported injuries  — but no reported arrests either  — as three separate sideshows laid the skids on SF streets this weekend.

The Citizen app was hopping this weekend, starting shortly after midnight Sunday morning when a large sideshow at Main and Harrison Streets did donuts and saw fireworks shot at around 12:30 a.m., according to KTVU. The same station reports there were three sideshows in total over this past weekend in SF, and since people tend to whip out their smartphones during these things, there is no shortage of pictures and video of the proceedings.

The Rincon Hill sideshow seen above generated the most pictures, video, and overall online discourse. While there are only about four vehicles actively participating in the sideshow, there is clearly a crowd of hundreds of onlookers, and dangerously close to the action.

1/3: Sideshow in area of Main & Harrison near Bay Bridge in San Francisco. “We were woken up by fireworks at 12:28, and shortly after that, the car squealing started and we went outside,” witness tells @KTVU. “The fireworks continued throughout.“ pic.twitter.com/xgBoOuqa2R

“We were woken up by fireworks at 12:28, and shortly after that, the car squealing started and we went outside,” one witness told KTVU. “The fireworks continued throughout.“

This video appears to show the denouement of the sideshow in question. “The police arrived about 10 minutes after it started. It started to break up around 12:45, after about 5 minutes of the cops flashing their spotlights,” a witness told the station. “Didn’t look like the cops arrested anyone.”

According to KGO there was another sideshow at Geneva and Alemany Streets at approximately the same time early Sunday morning. KTVU mentions a third sideshow in the Mission District, but with no details in the time or specific location.

San Francisco Police Officers Association (which is not the SFPD, it’s their union) acting president Tracy McCray said the lack of arrests is because police are “outnumbered and outgunned because people are bringing automatic weapons to these events, firing indiscriminately.” Though honestly, if people were firing automatic weapons indiscriminately, wouldn’t we maybe have heard some shots?

Once again another weekend of sideshow chaos and lawlessness. The reality is SFPD is “Outnumbered and outgunned because people are bringing automatic weapons to these events, firing indiscriminately,” Tracy McCray, acting president of the SFPOA.https://t.co/ZdqxQawsFr

The likelier explanation is that the sideshows just broke up once police arrived, which does not give you a ton of arrests, but does at least stop the dangerous behavior. This does not get to the source of the problem, though, as these things keep happening all over the Bay. And considering that illegal fireworks season is probably going to start pretty much any day now, we may be heading into something of a sideshow summer.

Facebook
Twitter
Pinterest
WhatsApp
Previous articleNew Details Around Suspected Overdose Death of 16-Year-Old in SoMa Show Evidence of Sexual Assualt
Next articleAnother Mini-Heatwave Is Heading Our Way, After Some Wind