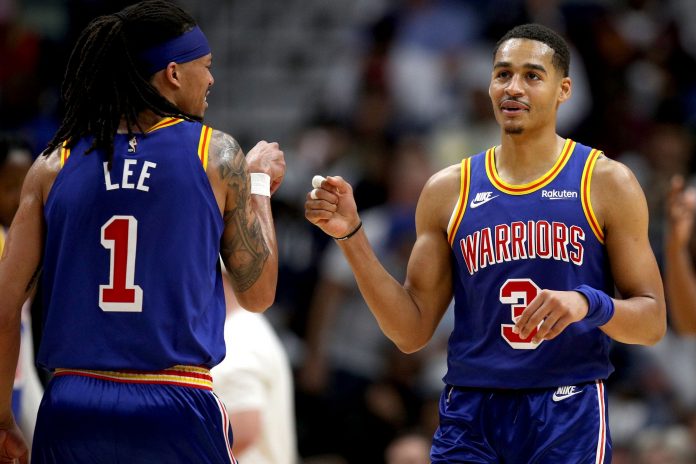 After a Season of Highs and Lows (But Mostly Highs), the Warriors Arrive at the Playoffs

If there were any lessons to be learned in the Golden State Warriors’ 2021/22 regular season, we as fans were reminded that it is a long and often perilous slog from Game One in the fall to the playoffs in the spring. Admittedly, the Bay Area might have gotten a little spoiled by the Warriors’ five consecutive trips to the finals. Even the two recent “off” seasons didn’t seem to curb expectations this year for greatness, even perfection.

With a win over the New Orleans Pelicans last night, the Warriors finished the season with a five-game winning streak and the third-best record in the NBA at 53-29. The Warriors will host the Denver Nuggets in round one of the playoffs on Saturday — they went 1-4 against the Nuggets this season.

For the first time in 58 years, the city of San Francisco will host an NBA playoff game. (Photo by Lance King/Getty Images)

This season saw a little bit of everything: The Warriors had an explosive start, going 28-7. For months, they paced the Phoenix Suns for the best record. Stephen Curry bagged the all-time three-point shooting title, but the weeks leading up to the record seemed exhausting, even distracting. Klay Thompson returned to the lineup after a 941-day absence, but he wasn’t as instantly perfect as we wanted him to be. (Where are the 37-point quarters?) Draymond Green would miss 26 games with a back injury, marking the start of slumps and streakiness both personal and team-wide. Phoenix ran away with the best record (finishing  64-18) while the Warriors ground out the back half of the season. There were a few heartbreaking, seemingly inexplicable losses. There were triumphant wins and the emergence of young players.

And for the cherry on top of this up and down (but overwhelmingly up) season, Steph got hurt and missed the final month the season, with his return still unknown, but expected. Commentators have been reminding us that Steph, Draymond and Klay have only played 11 minutes (minutes, not games) together this season.

The road fraught with highs and lows has led to the starting line of a much-anticipated playoff run. As fans, this year has been a reminder of just how hard it is to put together a winning season, and what a grind it is to simply arrive at the playoffs, with the mountain top still looming high above.

This is the March 16 game against the Boston Celtics, but not the play — though it has shades of similarity — where Stephen Curry sprained a ligament in his left foot. (Lachlan Cunningham/Getty Images)

Warrior fans have probably gotten used to waiting anxiously for medical diagnoses and nervously anticipating the return of superstars.

When Steph Curry suffered a sprained ligament in his left foot against the Boston Celtics on March 16, there was an audible gasp from Dub Nation. But the sight of Steph running (thank God, he’s running) into the locker room put minds at ease. Even when it was announced that Curry would miss the rest of the regular season, Warrior fans had become used to dealing with injuries and absences, and were reassured by the outstanding play of the rest of the team, even if it was a tad streaky and inconsistent.

So when, oh when, will Steph Curry return?

Before last night’s game, Warriors’ head coach Steve Kerr said, “There’s a chance he could be ready for Game One, there’s a chance he could not,” Sports Illustrated reported. “Kerr also added that Curry’s status for that game will likely come down to the wire, as the team will have him participate in a high-intensity scrimmage at some point during the upcoming week that will indicate his potential availability for that game. ‘I’m not exactly sure what Steph has done the last couple of days, but this week he will ramp it up for sure,’ Kerr said. ‘It’s really up in the air as far as Steph’s participation this week, we’ll see how it goes the next couple of days.'”

Steph Curry has been a tangible presence for fans and players alike since his foot injury in mid-March. Above: Curry celebrates during the Warriors’ fourth-quarter comeback win against the Utah Jazz at Chase Center on April 02. (Photo by Ezra Shaw/Getty Images)

Last night against the Pelicans, Klay Thompson scored 41 points — it was his first time breaking the 40-point benchmark this season, and his third-straight game with 30 or more points, which ties a career-high 30-plus-point scoring streak. Thompson ended the season averaging 20 points a game. Though he retuned as the highest-scoring player in NBA history who has come back after missing two full seasons due to injury, the sports world seemed to fret over Thompson’s play, and fans and analysts alike wondered if he would ever return to his old, superstar form.

“Man, everyone makes a big deal about my shooting,” Klay said on March 12 after a breakout 38-point performance against the Milwaukee Bucks. Thompson admitted that, prior to that night, he hadn’t been happy with how he’d been shooting.

“But I’ve been in this league for so long, I’ve done too many great things to doubt myself. I was eager for a night like this. But a mid-season shooting slump . . . I mean, it’s not going to kill my ego. I’m still going to go out there and compete.”

Klay Thompson scored 41 points last night in New Orleans. He shot 16-29 on field goals and 7-14 on threes. After his 38-point game against Milwaukee in mid-March, Klay said, “I don’t want to peak right now. I’m trying to come into the playoffs and really have the pedal to the metal.” (Photo by Sean Gardner/Getty Images)

With Curry out, Jordan Poole stepped up to the plate (if we can mix sports metaphors) and had an insane March. “Poole has caught the attention of the entire league this month, the best of his career,” said The Reporter about Poole’s March madness. “The crafty scorer is averaging 25.4 points in 16 games and 11 starts in March.” Poole led the NBA in made 3-pointers in March with 67, and had 17 straight games with 20 or more points, “making him only the 10th Warrior to have a 20-point streak of that length,” the Reporter said.

Is Jordan Poole the the next Splash Brother? JP celebrates against the Utah Jazz on April 02. (Photo by Ezra Shaw/Getty Images)

So how will it all gel after the opening tip against the Nuggets on Saturday? I’m not here to offer any prognostication. Maybe the better question is: Do the Warriors feel like they’re peaking at the right time?

“The Warriors are perhaps who we thought they were before the season began: a playoff team with a fading championship pedigree, straddling multiple eras, that is simply no longer feared,” SFGATE writes. Their article, titled “NBA Finals or early exit, the Golden State Warriors and Steve Kerr should consider an amicable divorce,” was clearly intended to prod and provoke. The story (which was called “clickbait” by many, many people on social media) made the case that Kerr is too mellow, which has perhaps led to Warriors’ complacency. “It seems as though Kerr still thinks he’s coaching a juggernaut and doesn’t need to get his troops too emotionally fired up for the task at hand. This lack of urgency has trickled down the roster, seen again and again in slow starts and coughed-up leads. This season will be remembered as one in which they routinely went down double-digits in dozens of first quarters, be they home games, road games, against good teams, against bad teams, just taking the court like they drank a box of wine during warm-ups and spotting their opponents a genteel advantage just to be good sports.”

But that article seems to be evidence of the expectations thrust upon the Warriors — they must be great at all times; they must win the “right” games in the “right” way.

There is no question that this was a season of highs and lows, but the vacillating emotions tend to complement each other. In January, the Warriors had a heartbreaking overtime loss against the Indiana Pacers. But the very next night, Steph Curry hit a buzzer-beater against the Houston Rockets. Are the highs higher on the tail end of the lows? If the Warriors do make it to the mountain top this postseason, will the grind of this season make it that much sweeter?

Facebook
Twitter
Pinterest
WhatsApp
Previous articleGiants Season Preview: Once Again, No One Gives Us a Chance Except Us
Next articleNew Details Around Suspected Overdose Death of 16-Year-Old in SoMa Show Evidence of Sexual Assualt