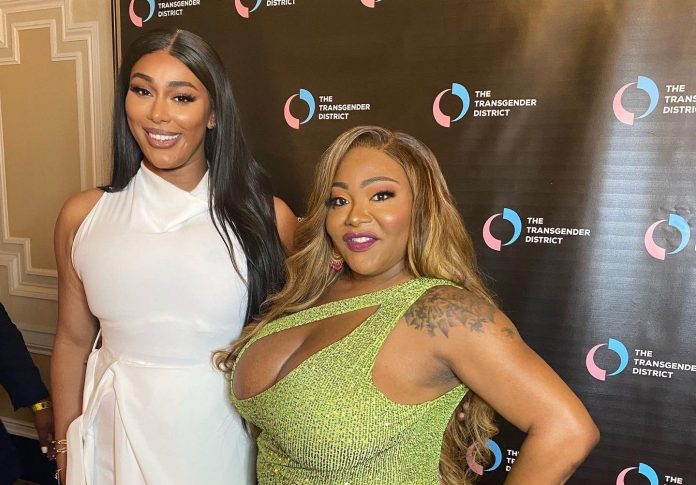 Some history: Last Wednesday would have been the 77th birthday of 1960s trans activist Marsha P. Johnson, a central figure in the Stonewall uprising, the annual commemorations for which evolved into what we now know as Pride celebrations. What is lesser known (outside of SF, at least) is that three years prior to Stonewall was the Compton’s Cafeteria Riot, a 1966 Tenderloin uprising of mostly trans women who’d had it with being harassed by police. Commemorations of the Compton’s riot led to August being established as Transgender History Month, thanks to the efforts of SF’s first-in-the-nation Transgender District.

Transgender History Month got its gala component on Sunday night as the district hosted the second annual Riot Party at the old Hibernia Bank building. KPIX was on the scene and got video of The Riot Party seen above, plus a full report in a separate article.

Had a great time at the @transgenderdistrict Riot Party in celebration of the 56th anniversary of the Compton’s Cafeteria Riot! And a wonderful close to #TransHistoryMonth #SuperHoney pic.twitter.com/phUoGPnrAM

“We wanted to create a space to celebrate transgender and queer artists in the music industry,” Transgender District co-founder and president Aria Sa’id told KPIX. “Often times, trans artists are not prioritized and yet a lot of the cultural contributions that we make end up in pop culture with popular artists that we all know and love who sort of borrow from our work. And why not create an event that centers their artwork and their music.”

This seems a great and uplifting, but of course it happened against the backdrop of a wave of weaponized transphobia in the culture wars happening all over the United States. And that was reflected in enhanced security at Sunday night’s event.

“Security measures are in place given the state of the world and mass shootings,” organizers said  in a Facebook invite. “All guests will go through metal detector and bags will be screened (if y’all don’t want us to see what’s in that bag then leave it at home or your friends house lol).”

Facebook
Twitter
Pinterest
WhatsApp
Previous articleDay Around the Bay: We Appear to Have the First U.S. Monkeypox Death
Next articleHumpday Headlines: Updated Boosters From Pfizer & Moderna Cleared By FDA