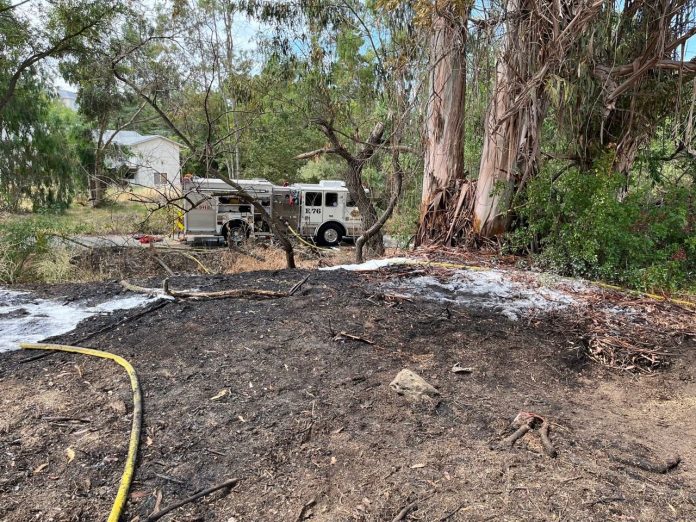 It was a busy Saturday for the Santa Clara County Fire Department, the local Cal Fire Unit, and the Foothill-De Anza Community College Police Department, as they battled 10 fires — all allegedly set by the same person.

It was at 1:13 p.m. this past Saturday afternoon when the Santa Clara County Fire Department responded to a vegetation fire near Josefa Lane in Los Altos Hills. They quickly found another, and then another, and then another. There were actually 10 fires in the area, and now the Bay Area News Group reports that one woman has been detained and charged with ten counts of arson for setting the whole lot of them.

During the afternoon of Saturday 7/30 #SCCFD, @calfireSCU, @SCCoSheriff and @FHDA_Police responded to a report of a vegetation fire in the area of Josefa Ln in #LosAltosHills, CA. Firefighters found multiple fires burning over a large area. 1 person of interest has been detained. pic.twitter.com/itIqNRcdrU

We see some of the wreckage caused in the tweet above from the Santa Clara County Fire Department. “During the afternoon of Saturday 7/30,” the department notes, “Firefighters found multiple fires burning over a large area. 1 person of interest has been detained.”

Per the Bay Area News Group, that person is 25-year-old Paige Marie Turnbull of Vacaville. She was taken into custody by the Santa Clara County Sheriff’s Office, and is currently being held at the Elmwood Correctional Facility in Milpitas on $100,000 bail.

Firefighters mounted an aggressive fire attack and were able to prevent loss of life, injuries and property damage. An incident information sheet is available at https://t.co/1XSyZ76qoU. Community members are reminded to prepare for wildfire by visiting https://t.co/gbvrOFLLVx. pic.twitter.com/uKtdiASPLO

Residents of about a dozen homes on the road, which is just north of Foothill-De Anza Community College, were briefly evacuated from their homes. According to the News Group, the fires ranged from a few square feet up to an acre, and the largest blaze was contained at one and a half acres. Thanks to a combined effort from the Santa Clara fire department and a Cal Fire computer, the flames were all extinguished within an hour.

But this comes against the backdrop of the currently raging McKinney Fire near the California-Oregon border, the largest blaze yet of this California wildfire season, which currently has a death toll of four. Given the extreme heat and dry conditions, and that Mariposa County’s Oak Fire is still not fully contained, firefighters really do not need the threat of more of these blazes.