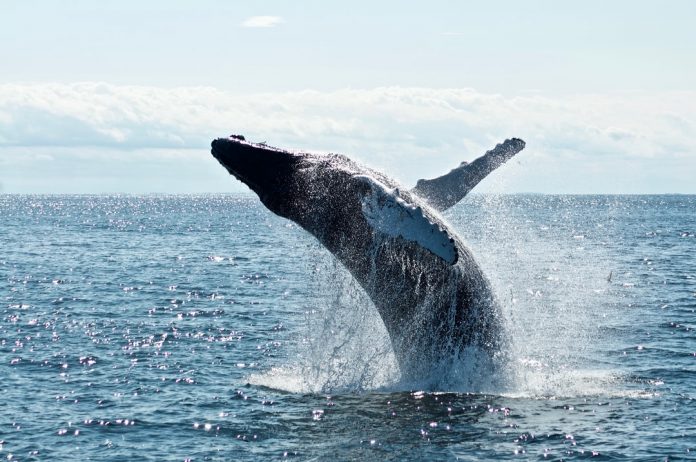 May and June have become prime whale-watching times in San Francisco Bay the last five or six years, with both gray and humpback whales increasingly entering the Golden Gate in search of food as they travel to their summer feeding grounds in Alaska.

But as experts have told us each year when these whale sightings tick up, it’s not necessarily a good thing that we’re getting to see more up-close whales in the Bay. Humbacks in particular did not used to make detours into the Bay, and the reason they have been in recent years may be several — but climate change and a lack of food resources where they’ve traditionally found them may be partly to blame.

“It’s great for the whale watching, it’s great for the passengers to get to see it. But as a naturalist, I realize this is not necessarily the best sign,” says Michael Pierson with San Francisco Whale Tours. “Definitely with the grays I’m seeing a lot more skinny animals when we’re out there, and you can really tell when it’s a skinny whale. A whale should be a really big, robust animal, and when they’re skinny, when you can see their scapula, the shoulder blade, you know that you’re looking at an animal that really needs to get some nutrition and relatively quickly.”

Pierson says that one theory suggests that the melting of sea ice in Alaska has led to less and less food for gray whales in particular once they arrive in their northern destinations, and the act of swimming into the Bay may be an act of desperation.

Gray whales are opportunistic eaters who enjoy some tiny crustaceans that often can be found in the Bay and the Delta. Humpback whales, meanwhile, feed on plankton and anchovies as well as tiny crustaceans, and their appearances in the Golden Gate and in the Bay may reflect the fact that they’ve found good food here in recent years and remember to make a stop, experts say.

Both species of whale make annual migrations north in the spring, to spend the summer fattening up on Alaskan fish and crustaceans, and then they head south in the fall to their winter breeding grounds off the coast of Mexico.

Spring and early summer are also times when we’ve seen upticks in dead whales turning up on area beaches — something that happened with particular frequency in the springs of 2019 and 2021. The deaths, sometimes analyzed by necropsies by the Marine Mammal Center, are typically ascribed either to malnutrition or to ship strikes — with these treks into the Bay putting more whales in harms way in shipping lanes.

Currently, there is a dead gray whale carcass on a beach in Point Richmond that is causing a significant odor — it’s been there since Memorial Day — and the city has now hired a contractor with an excavator to try to bury it.

Meanwhile, KPIX has covered the whale appearances as if this is a completely novel phenomenon that hasn’t been an annual occurrence for years. And they sort of gloss over the climate change/food supply issue.

Facebook
Twitter
Pinterest
WhatsApp
Previous articleMandelman’s Shelter-for-All Plan Passes Board Unanimously, Though Many Are Skeptical It Will Do Anything
Next articleDay Around the Bay: We Just Got Our First Spare the Air Alert of 2022