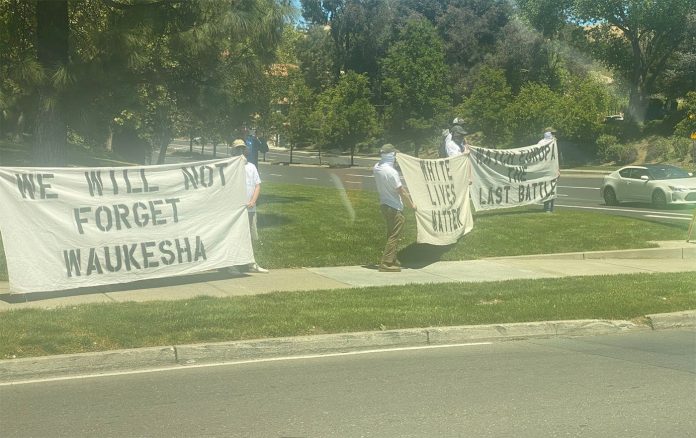 A disgusting demonstration took place in the East Bay community of Blackhawk Saturday just hours after a mass shooting claimed ten lives at a grocery store in Buffalo, New York, most of them Black people.

Several men, fully masked by bandannas in a nod to KKK-style anonymity, held up large painted banners at a Blackhawk intersection Saturday with the messages “White Lives Matter,” “Watch Europa the Last Battle” and “We Will Not Forget Waukesha.” (Europa: The Last Battle is a 2017 Swedish documentary espousing white supremacy and attempting to justify Nazism; and Waukesha, Wisconsin was the site of a deadly November 2021 incident in which 39-year-old Darrell Brooks plowed an SUV into a holiday parade, and because Brooks is Black and allegedly expressed violent views online toward white people and Jews, the parade attack has been seized on in white supremacist circles online.)

The incident took place at the corner of Blackhawk Road and Camino Tassajara in Blackhawk — a series of gated communities east of Danville that is predominantly white.

Saturday afternoon in Danville, CA. Notice most of these folks hate wearing mask to protect others but entire faces covered so no one recognizes them. pic.twitter.com/nnMIa9ss0M

The brief rally was documented on Twitter, and as the Chronicle reports, Contra Costa County sheriff’s deputies went to the scene, but no arrests were made because they said no crime was being committed. Jimmy Lee, a spokesperson for the sheriff’s office, said “there were no violations of the law.”

The mayor of Danville, Newell Arnerich, released a statement saying, “These people were acting out hate speech. Though not a crime, this was clearly an abhorrent gesture towards people of color.”

Arnerich added, “People and groups like these are looking for confrontation and publicity, and we will not condone them nor give them any credibility, attention, or the publicity they are seeking.”

Saturday, May 14 was actually a coordinated day of action for white  supremacists, as documented on the White Lives Matter Official Telegram group and elsewhere. The white supremacist terrorist who attacked a Top’s supermarket in Buffalo, identified as 18-year-old Payton Gendron, appears to have heeded an online call to action from these groups, and those who espouse a belief in the “Great Replacement” conspiracy theory.

Like the anonymous racist assholes in Danville, Gendron also invoked the Waukesha parade deaths, scratching the name of at least one victim — 79-year-old Virginia Sorenson — onto the barrel of his rifle. The rifle also featured the N-word, and other references likely culled from online forums and boards like 8chan. Gendron admitted to deriving his ideology and the inspiration for the mass shooting from such boards, which he got into while “bored” during the pandemic.

As the New York Times and others have reported, Gendron lifted an entire section of a 180-page manifesto he posted online from the manifesto of the white-supremacist terrorist from Christchurch, New Zealand, Brenton Tarrant — who is also directly cited. Tarrant, like Gendron, live-streamed his 2019 mass shooting at a mosque.

It’s not clear whether the Danville white supremacists were paying attention to the news and pulled out their banners hours after the Buffalo attack on purpose, or if they had just been planning the rally anyway as part of the the White Lives Matter coordinated effort. Regardless, they’re all of apiece, and equally egregious, toxic, and borne of social media. And both the Danville demonstrators and Gendron appeared intent on stoking tensions toward a potential race war — something they also have in common with Charles Manson.

To be clear: No one is trying to replace you, racists. But most of us wish you were better educated, and that you learned things from credible books before you found the dark corners of the internet.

Per the Chronicle, a counter-protest is scheduled for Tuesday, in Danville or Blackhawk (details unclear).