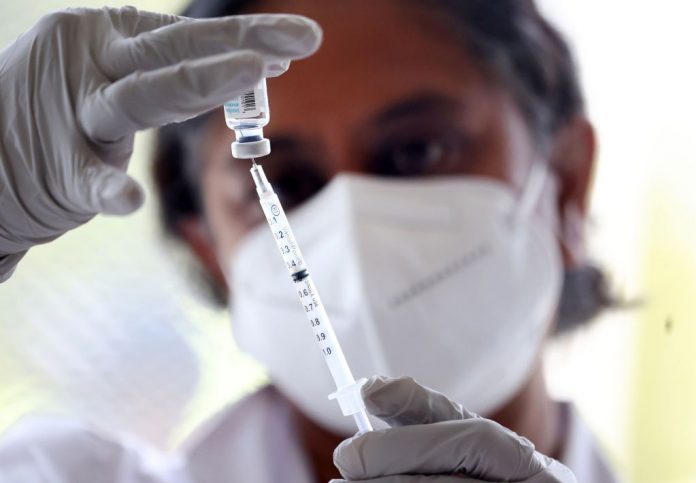 In an effort to vaccinate as many people against monkeypox — a global public health emergency that includes at least 546 cases in San Francisco, which accounts for roughly a quarter of all confirmed or suspected infections in California — as possible, the walk-in vaccine clinic at 1001 Potrero Avenue opened Saturday for its first weekend to immunize patients.

The current monkeypox outbreak (that presently includes over 31,700 cases of the zoonic disease) is disproportionately affecting vulnerable communities, particularly gay men; data procured by the Latino Task Force also found that while Latinx communities make up some 15% of SF’s population, over 30% of all current monkeypox cases are within this group.

The San Francisco Public Department of Health (SFDPH) initially requested 35,000 doses of the JYNNEOS two-dose vaccine to meet part of the need. To date, SFDPH has received 23,000 units from the federal stock supply – some of which were administered to patients yesterday, August 13, during its first walk-in monkeypox vaccine clinic held on a weekend.

“I think the whole gay community here in the city is trying to vaccinate for monkeypox and at first, it was so hard to do it,” Noah Sochet, a San Francisco resident, said to ABC7 while waiting to receive his vaccine dose. Sochet previously found himself in a situation familiar to many gay men in the city as of late: Waiting hours in line in the hope of getting inoculated against the disease that spreads predominately through prolonged skin-to-skin contact.

While previous efforts proved futile, yesterday’s patience practiced by Sochet was worth it; Sochet left the clinic having received the first shot of the two-dose vaccine series; SFDPH, however, has decided to prioritize first-dose appointments amid the trickling supply and proven science that shows how efficacious a single dose of the vaccine is at in thwarting symptomatic and severe cases.

Zuckerberg SF General Hospital’s CEO, Dr. Susan Ehrlich, said to the news outlet that the long vaccine wait times previously observed are about to be a thing of the past.

“Now what we want to make sure is that we’re available to everybody in our community because we want to make sure that we’re as convenient and meeting people where they need to be met as possible,” Ehrlich said, mentioning that San Francisco received around 10,000 monkeypox vaccine doses at the beginning of the week from the federal supply — “we’ll see how we do, we may be open again on Monday and then we’ll wait and see what vaccine is available to us after that.”

For more information on monkeypox in SF, including eligibility for the vaccine, case counts, vaccine locations, and ways to avoid infection visit sf.gov/monkeypox.

Photo: Registered pharmacist Sapna Patel demonstrates the preparation of a dose of the monkeypox vaccine at a pop-up vaccination clinic opened today by Los Angeles County Department of Public Health at the West Hollywood Library on August 3, 2022 in West Hollywood, California. California Governor Gavin Newsom declared a state of emergency on August 1st over the monkeypox outbreak which continues to grow globally. (Photo by Mario Tama/Getty Images)