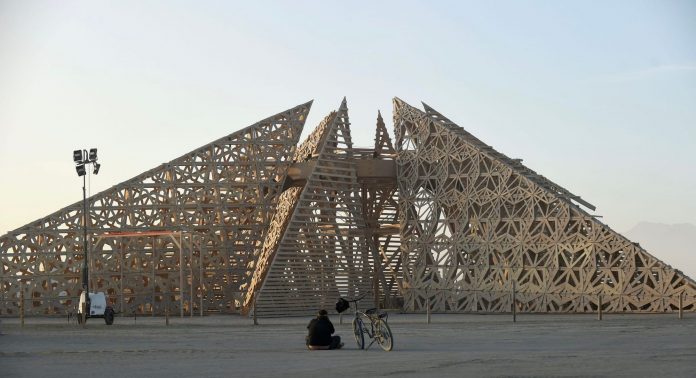 It’s already Day Two of Burning Man 2022, and thanks to a bunch of Burners taking their beloved Starlink satellite internet kits with them, they’re online and we can see what’s been built in Black Rock City this year.

It’s that time of year! Time to resurrect that specious claim that San Francisco empties out during Burning Man, as the annual arts event officially started at Midnight Sunday and is now on Day Two. If you’re reading this, you are probably not on the dusty playa of the Black Rock Desert.

But we’ve scoured social media to find posts of the top art projects and such. So tune in, drop hits, and scroll down for the best stuff from Burning Man 2022 that we’ve seen posted to social media.

There he/she/they is, the Burning Man effigy for 2022! It is green with some yellow and blue highlights, and as usual, has a nebulous connection to whatever the nebulous theme of the year is (This year’s theme is “Waking Dreams).

“To represent sleeping dreams, the ornament (the five spars radiating up from the Man’s pelvis) was topped with softly glowing rings depicting the phases of the moon,” according to an artists’ statement. “These discs float above a sea of neon light, undulating in the moon’s tidal pull, and representing the deep waters of the unconscious realm.”

For suckers stuck at home, your best bet for a taste of that alkaline dust is the Burning Man webcast. The broadcast goes all week, sometimes with narration, and of course they will broadcast the Burn, which will be around 9 p.m. Sunday night.

This year the Temple prefers to be called The Empyrean Temple, and was designed by Colorado-based architect Laurence Renzo Verbeck. And folks, this year the Paiute tribe and Burning Man Project once again asks that you please not place cremated human remains in the Temple area.

One of the more celebrated new art installations this year seems to be Gaia by sculptor Marco Cochrane whose work you’ve seen via many nude woman statues that have been installed around the Bay Area. You can see a rendering of the full version here, and a partially completed version from the warehouse here.

Eric Coolidge’s Autumn Spire is one of the 2022 Burning Man Honoraria installations (meaning they got a grant from Burning Man to build it). You can see it in this photoset of Burning Man 2022 pictures, though you have to click through a few to get to this one.

That same Instagram Burning Man photoset shows us a pretty rad place to rest on your bike ride, complete with benches.

We don’t know the name of the artists of this work, but these dancing skeleton sculptures are a hit with good reason.

The kids’ favorite Instagram trap at this year’s Burn seems to be these sets of coupled silver statues (there are at least two sets), where couples can take pictures and be all “Hey, we’re posing just like them!”

There is definitely overlap between Burning Man fandom and Elon Musk fandom, and heck yes the bros are making a show of bringing their Starlinks. Will anyone drive their Tesla out there and allow it to be wrecked by the elements? I bet someone does!

We end with what is not at Burning Man this year, the coffee sales at Center Camp Cafe. According to the Burning Man Project, “coffee commerce in the center of our decommodified city has been a point of perennial debate for years. Experimenting with no coffee sales in 2022 is a tangible example of Burning Man Project’s commitment to our values.” But some of the early Burners built the cafe replica seen above, and you better believe they set it on fire shortly after.