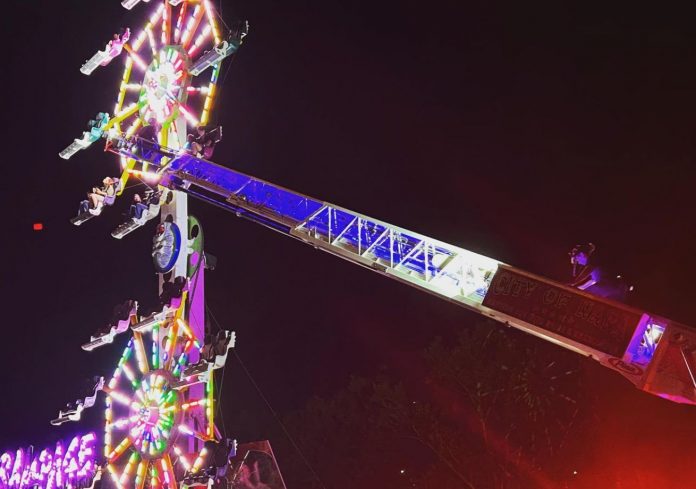 Children as young as eight years old were stuck in the sky when a ride malfunctioned Saturday night at the Napa Town & Country Fair, requiring a fire department ladder truck to get them all down safely.

A county fair type of thing called the Napa Town & Country Fair wrapped up Sunday night, and that’s just as well, as some less-than-outstanding headlines are coming out of this year’s fair. The Napa County Register reports that 12 people got stuck on a double ferris wheel ride when it malfunctioned and stopped operating Saturday night. Some of the stuck passengers were as young as eight years old, and some stuck as high as 70 feet in the air, but fortunately, the Napa Fire Department was able to rescue everyone safely with a ladder truck.

The ride is called Rampage, and it’s a double-Ferris wheel sort of contraption with two wheels spinning on a larger arm — a traveling ride used at many of these fairs. As expected, one teen stuck atop the suddenly immobilized ride took live smartphone video of his ordeal. “That’s crazy. We’re stuck at the top of a ride right now,” says 17-year-old Jacob Degraw, in video he provided to KGO seen above.

“They just left us swirling up there and they didn’t tell us like we were broke down,” he added. “We kinda figured it out when the security guard showed up.”

It is also a sign of the times that the Napa Fire Department Instagrammed the rescue, in the three-photo set seen below.

“Battalion 1 responded and found a ride that had stalled with 12 riders on board,” the department says in their post. “Crews were able to work in conjunction with Fair employees and successfully remove all 12 riders. No injuries were reported.”

According to the Register, “Napa Fire deployed a ladder truck – with a turntable-mounted ladder that can extend as high as 105 feet – to allow the Rampage passengers, who ranged in age from 8 to 20, to dismount safely.” The paper adds, “The height of the carnival ride was not immediately available, but [Napa city firefighter Nick] Rizzo said the truck ladder was raised to 70 feet during the rescue, which was completed within half an hour.”

After Saturday night’s mishap, the ride was shut down for all of Sunday, the final day of the fair. And that was apparently a disappointment to 17-year-old Jacob Degraw, whom KGO reports  “had planned to go back on the ride Sunday but it was closed.”