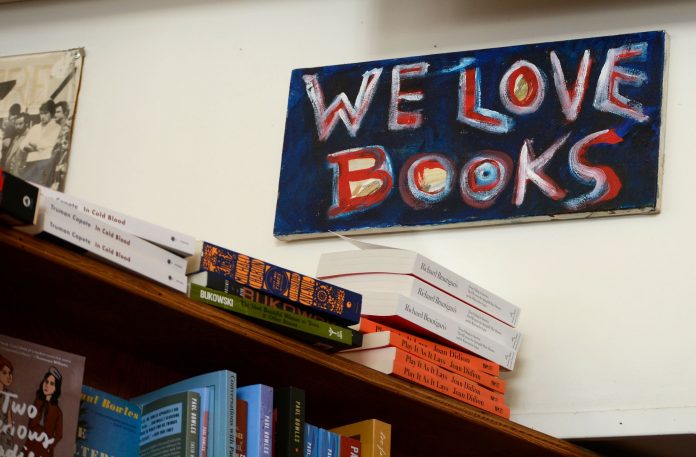 Independent bookstores are one of the vertebrae that make up the backbone of society. April 30th is the national holiday —Independent Bookstore Day (IBD) — started to celebrate, support, and honor these bastions for all things literature.

Fast forward two years later and with over 85% of San Franciscans now fully vaccinated against COVID-19, bookstores are booming — proving why they, too, exist as a place of connection and community both on the screen and, of course, in real life.

While there’s never an excuse needed to find yourself lost underneath shelves of purchasable literature, IBD offers additional impudence to do so. For us who call the seven-by-seven home, there’s no shortage of independently-owned bookstores to peruse.

And they’re all worthy of your hard-earned cash (or crypto), but we’d be remiss to say we don’t have our favorites among the bunch; here are five of them.

For fourteen years, Bookshop West Portal has been a locally-owned, independent bookstore in the heart of SF’s West Portal neighborhood. Over those years, it’s grown into a community meeting place where booksellers greet patrons with an enthusiasm for literature, helping serve a growing community of book-lovers. Its event’s calendar — which includes Independent Bookstore Day-specific events today — is always full and features a wide array of literary tastes; Bookshop West Portal has also put together a handy list of anti-racism readings to help expand your cognition of the racial inequalities that are very much still present this country.

When Dog Eared books shuttered its location in the Castro last year, there was a collective panic about what would happen to the space. Well, fortunately, it was eventually swooped up by Alvin Orloff, a 20-year employee of the Castro location, and later transformed into Fabulosa Books: a now-open touchstone for queer books and left-of-center finds (like, for example, a book on how cephalopods might one day become the dominate species on planet earth, which I recently purchased from the shop). This transition hasn’t affected the original Dog Eared Books on Valencia Street, which will remain under the same current ownership.

Situated on Haight Street, this independent neighborhood bookstore is beloved for its inviting atmosphere, effusive and incredibly knowledgeable staff, and frequent notable author readings. While the pandemic affected all the in-person events, making the shop embrace digital book readings, the literary establishment remained open — continuing its status as being as much of a Haight Street icon as Amoeba Music. Browse the staff recommendations for serendipitous buys; take note of the in-book notes to get a sneak peek of what’s to come; sometimes, there are signed copies leftover from previous events you can purchase, as well.

Green Apple Books attracts legions of patrons — no matter the day of the week — for a many reasons. It’s always busy, stays open late (compared to other local bookstores), and is a sublime place to just browse literature and get lost in book spines. Don’t miss the fiction section; just because it’s national Independ Book Day doesn’t mean you can’t pick up a record there, either.

What might be the most recognizable bookstore (and publisher) in the city, City Lights Bookstore is favorited by locals and tourists alike. The North Beach establishment, known as a “literary landmark,” was founded in 1953 by poet Lawrence Ferlinghetti and Peter D. Marti. It served as a publisher of independent literature at the forefront of the progressive-thought movement with such Beat generation greats as Jack Keroauc and William S. Burroughs; there is no better selection of poetry volumes in San Francisco, bar none.