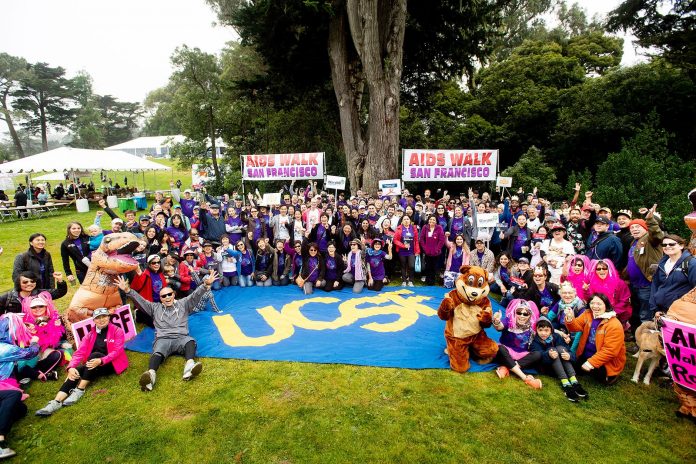 After a two year-hiatus marked by successful online events and fundraisers, SF’s 6.25-mile AIDS Walk through Golden Gate Park returned for the first time since the COVID-19 public health crisis began in 2020 — and now amid a rising number of recorded monkeypox cases in the city, an outbreak primarily impacting gay and bisexual men that AIDS organizations have been trying to tackle head-on.

Since its inception in 1987, AIDS Walk San Francisco encourages thousands of Bay Area residents to annually walk, donate, and volunteer in the fight against the HIV/AIDS epidemic. Over those 35 years, more than $90M has been raised for organizations across several Bay Area counties; the event has now grown into, and remains, the largest and most visible HIV/AIDS fundraising event in Northern California.

The pandemic, however, effectively shelved the IRL walk, and it just returned on Sunday, July 17, in all its former glory, as thousands walked through Golden Gate Park in solidarity with those who’ve been affected by HIV/AIDS, as well as advocating for a need for further medical advancements in treating and preventing the disease.

Let's continue to take a stand against the racism, sexism, and transphobia that have perpetuated the HIV/AIDS epidemic for far too long. Register for AIDS Walk San Francisco TODAY! #AIDSWalkSF #WalkItOut Link in bio. pic.twitter.com/dohYIYxk4d

“When I started with this, people were dying. You would see them. Three weeks later they would be in the hospital, two weeks later they would be gone,” said Bert Champagne, the event director of AIDS Walk San Francisco, to KPIX, noting that this was the first AIDS Walk San Francisco to be held since 2019. “People are still getting infected, people are still dying so we still need to fight this fight.”

Barb Howard, who has volunteered 34 years in a row and was in attendance for the return of the AIDS Walk San Francisco, t0ld the news outlet that turnout has grown since she joined the cause in 1989: “Give your time and efforts to causes that you care about and mean something to your heart.”

According to a donation tracker on its website, the AIDS Walk SF has raised over $765K as of July 18, and the nonprofit is still accepting donations.

Good news! We have been notified that next week SF will get 4,163 doses of monkeypox vaccine. This is less than we hoped for, but we’ll take it! We’ll begin distributing to sites next week: https://t.co/9bZiFVD2wI 1/4 pic.twitter.com/UWO93E78RJ

Many activists have likened the government response to monkeypox to the early days of HIV cases.

Though San Francisco is receiving over 4,000 units of the monkeypox vaccine this week, this is less than the city had hoped to attain — and by no means enough to vaccinate all those wanting the vaccine.

“We do not have enough vaccines in San Francisco,” said  Russell Roybal, the chief advancement officer for the San Francisco AIDS Foundation, which operates the community center and health clinic Strut in the Castro. “The only way we’re going to be able to prevent the outbreak from going any further is by vaccinating as many people as possible.”

For more information on the AIDS Walk San Francisco, as well as how to donate to its ongoing efforts, visit sf.aidswalk.net.