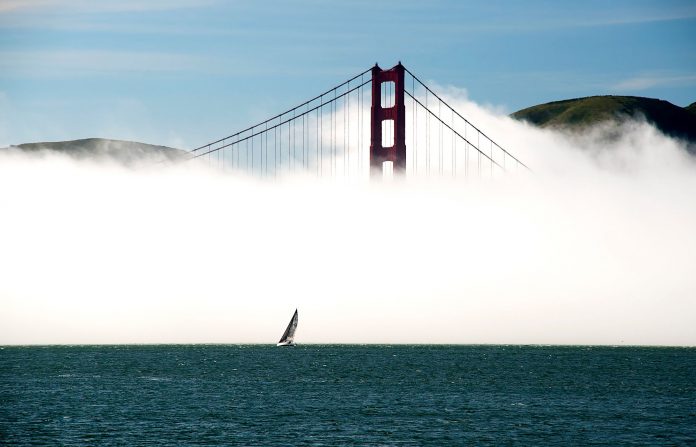 This isn’t the well-practiced ocean navigator’s first time sailing this course, mind you. In 1962, a 23-year-old Horie took his tiny wooden ship — the original Mermaid — on a three-month solo journey from Osaka to San Francisco. He completed the 5,300 hundred miles in just 94 days.

He couldn't wait.
Kenichi Horie sailed under the Golden Gate Bridge at 9:48 this morning on his solo journey to Japan. https://t.co/tv1H6FUeAK pic.twitter.com/A53WhPZm6q

But once he set foot on dry land, the young Horie wasn’t exactly given the most gracious and kind of warm welcome. In fact, he was arrested for arriving without a passport; he had no money, either. As KTVU opined about, his story arc from vilified alien to, without hyperbole, eventually released from jail by then-San Francisco Mayor George Christopher, who then also gave him both a 30-day visa and gifted him a key to the city, is one for the history books.

Having conducted this same voyage alone before, Horie expects to feel lonely. That feeling of solitude, however, will be mitigated by the people back on land cheering him on from afar: “I do get lonely, but everybody is rooting for me,” said Horie through an interpreter, per the news outlet.

Accomplished single-handed sailors — the descriptor given to those who sail long distances by themselves, sans outside help of any kind — say what Horie is doing is nothing short of astonishing, especially at his age. “He’s an amazing sailor,” says Alex Rynechi, a fellow single-handed sailor, noting that the Mermaid II, which has the exact same dimensions as Horie’s original ship he crossed the Pacific on over six decades ago, is “not a big boat.”

“He essentially makes his own adventures, he invents these things which I think is very clever,” Rynechi adds. “He just decides to do them and I think age is a real factor.”

Unlike this inaugural voyage conducted in the 1960s, Horie will at least have technology on his side this time around; he’s taking with him a long-range cell phone to keep in touch with his family and friends as he charts across the Pacific.

Barring any hiccups and less-than-ideal weather events, Horie expects to complete his trans-Pacific odyssey in about two and a half months. And the first thing he plans to do when setting foot in Osaka? Take a nice, long, warm bath. (I mean… who could blame him?)

For those interested in seeing the original Mermaid vessel IRL, it now resides at the San Francisco Maritime Museum for the public to observe and fawn over.