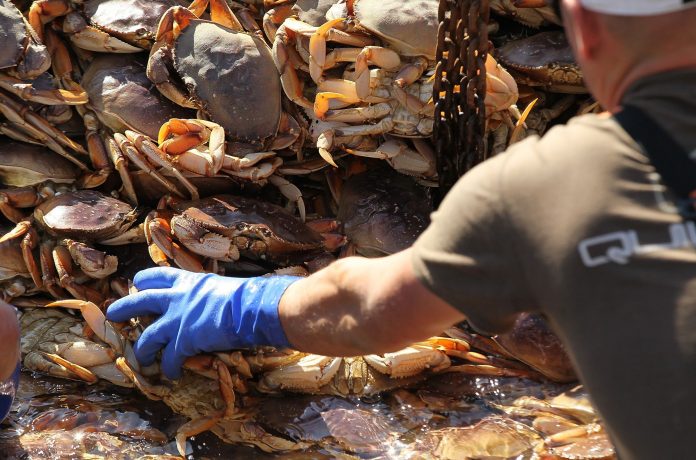 After Two Whale Entanglements, Most Dungeness Crab Fishing Off California Will End Early

Crabbing season is a perilous time for transient whales off the California coastline. And on Friday, citing two recent whale entanglements caused by crab-fishing gear, the California Department of Fish and Wildlife (CDFW) said that April 8 will be the last day of crab fishing for most of the state.

From 2015 to 2020, more than 280 whales were found entangled off the U.S. West Coast — mostly off California. Mind you: These are just the ones we know about. Marine biologists believe we only record a fraction of all the whale entanglements that are occurring, especially those during crabbing seasons where gear is sent incredibly deep. As Mercury News pointed out in May of 2021, the historic average of confirmed whale entanglements averaged under 10 a year before 2014.

That was, however, before a sharp increase was observed in 2015 (that saw 62 whale entanglements), 2016 (another year that saw over 60 whale injuries caused by fishing gear), and 2017 (the year that saw a whopping 71 whale entanglements). Between 2018 and 2020, the annual whale injuries caused by commercial fishing — all of which continue to be mainly from commercial Dungeness crab gear — have sat well above 30.

While it’s unknown how many whales have already become wrapped in fishing gear this Dungeness crab season, the recent entanglement of two humpback whales off the NorCal coast has prompted CDFW officials to end this year’s Dungeness crab fishing season early out of an abundance of caution for the well-being of these whales.

“The past few seasons have been difficult for fishing families, communities, and businesses, but it is imperative that we strike the right balance between protecting humpback whales and providing fishing opportunities,” said California Department of Fish and Wildlife Director Charlton Bonham, per the Chronicle.

The newspaper noted any commercial Dungeness crab traps that are left in the water past the closure date “will be removed starting on April 15,” and though this ruling doesn’t apply to the commercial crabbers in “Mendocino, Humboldt, and Del Norte counties or recreational Dungeness crab fishing.” These omissions could change when humpbacks return to forage during the spring and summer months.

Even though humpback whale populations have returned from near extinction — the current global population has rebounded to nearly 80,000 animals, up from a low point of around 10,000 to 15,000 whales at the turn of the 20th century — it’s imperative we still protect these animals at all costs.

“Humpback whales migrate hundreds of miles to Monterey Bay, and state officials should protect every single one while they’re feeding there,” says Catherine Kilduff of the Center for Biological Diversity, who applauded the closure… before noting that more actions are needed to protect migrating whales. “It’s time to get serious about moving to ropeless gear that keeps whales safe off the California coast.”

It’s unclear how much of an impact this early closure will affect our ability here in San Francisco to crack into these delicious crustaceans. But suffice to say the literal survival of a cetacean species takes precedence over hankerings for succulent claw meat.

Related: You Can Buy Fresh Local Dungeness Crab Off Boats at Fisherman’s Wharf Starting at 3 p.m.