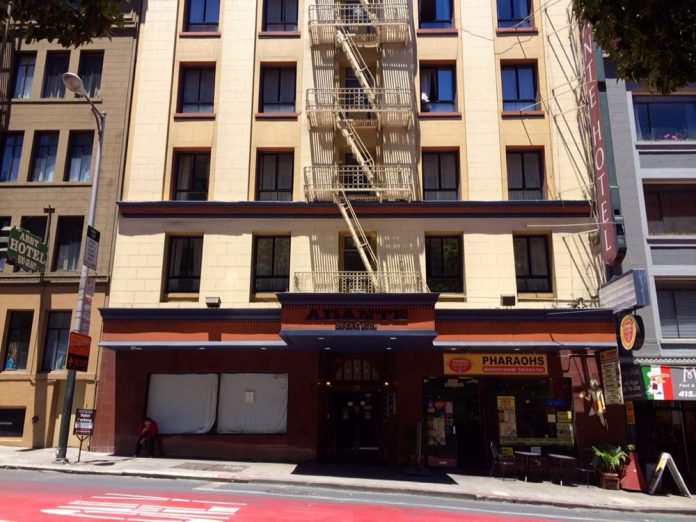 As Shelter-In-Place Hotel Program Winds Down, Residents and Managers Look Back on Whether it Actually Worked

San Francisco’s Shelter-in-Place Hotel program is roughly 75% finished, with the remaining 25% to expire in the weeks to come. Let’s check in on the statistics — and people — who can say whether it was effective.

If you had told me in the Before Times that San Francisco hotels would be clamoring to let homeless people crash in their rooms on someone else’s dime, I would have asked where I could score some of that Grandpappy Kush you’ve been smoking. But the pandemic certainly changed things, and the Shelter-In-Place (SIP) Hotel Program has housed nearly 4,000 people over the last two-and-a-half years, keeping them off the streets during the deadliest phenomenon of the modern era, while providing income and continued employment for a moribund hospitality industry.

But this gig was never going to last forever, and now the end is nigh. The city’s Shelter-in-Place Hotel Program Wind Down announcement does not give a specific date, but says the program will go “through the fall of 2022 as federal and state funding for the program comes to an end.” And 75% of the hotels that had been in use are no longer in the program.

So were all the millions of federal, state, and local tax dollars thrown at this worth it? Some of you will inevitably say it was liberal hellhole San Francisco enabling its subhuman element, others will say that Mayor London Breed did not go far enough to guillotine wealthy hotel owners and house the homeless for free for life. But to those of you who can be swayed by thoughtfully presented analysis and reporting, the nine-minute KGO segment below gives an excellent analysis of whether this warts-and-all SIP Hotel Program program worked, and where things stand as it sunsets.

Yes, it obviously got people off the streets, 3,754 of them over 28 months, to be exact. They were less likely to contract (or give someone else) COVID, and they were afforded the dignity of their own bed, TV, and bathroom. They were also given a dedicated case manager, to try to keep them on the up-and-up, and help them into permanent housing when the time came.

“San Francisco alone has rehoused almost 1,200 individuals to permanent housing,” Steve Good, CEO of a nonprofit Five Keys that managed some of the SIP hotels. “I mean, these are people that were on the streets, they actually now have a permanent place to live.”

Yeah, but didn’t some people just trash the rooms? Yes, and the Board of Supervisors is working on compensating the hotels, but “trashed” is a relative term.

“I mean, you take somebody that potentially has a pet [and is] suffering from a dual diagnosis of mental illness and substance abuse, who has been living on the streets for years and has not taken care of themselves. Put them in a room and it can be quite challenging,” Good said. “What you and I might perceive as garbage, those are their belongings.”

Of course, one notable stakeholder was overlooked and not spoken to in this segment: the hotel owners and staff. That notwithstanding, they were paid in full, as if operating at full capacity with normal tourists.

As seen above, only six of the overall 25 SIP hotels are still operating as such. Other data from the Department of Homelessness and Supportive Services tell us that 674 residents remain in them, out of an overall 3,754 severed throughout the pandemic.

Aren’t we just kicking them back on the streets? Not in most cases. The chart above (which is crazy granular but the full version is here) shows that currently 1,089 have been moved to other housing, and 839 have been moved to shelters or “other exits.” So that’s nearly 2,000 people with roofs over their heads.

The homeless hotel purchases do provide for permanent solutions, and shrewdly took advantage of state and federal pandemic funding dollars for long-term outcomes. Ultimately, and ironically because of the pandemic, London Breed has probably done more to reduce homelessness in San Francisco than Willie Brown, Gavin Newsom, and Ed Lee did in their administrations combined. It’s very odd she doesn’t toot her own horn about this more, but it seems her political calculus leans toward getting people worked up that everything is out of control with drugs, crime, and homelessness.

Still, the SIP Hotel program was probably a hell of an accomplishment, even if politically, Breed would rather not take credit for it.

Related: With Shelter-In-Place Hotel Program Winding Down, Some Hotels Are Suing the City for Damages [SFist]