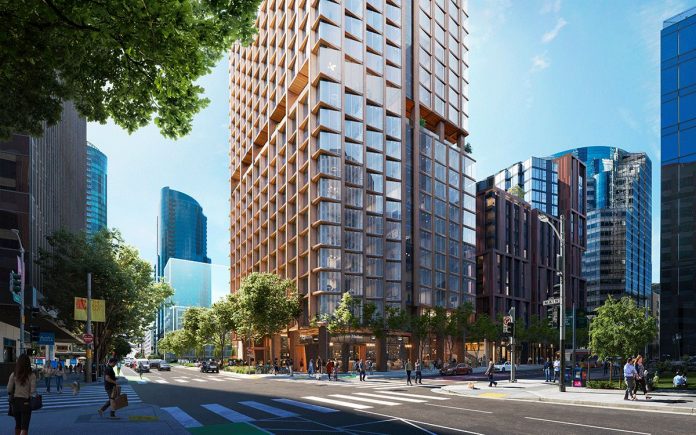 The block-sized property in SoMa that became home to the temporary Transbay Transit Center during the construction of the new transit center has been a site of planned affordable housing. And now the developer’s plan for a 681-unit, three-tower complex has won approval from the SF Planning Commission.

The developer behind the project is Hines, and with housing density bonuses, they have added 60 feet to the taller tower, bringing it to 513 feet or about 40 stories. That has also allowed the project to boast the highest percentage of below-market-rate units of any for-profit development downtown, with 45% affordable units. That amounts to 307 out of the total 681 units, as the Chronicle reports today, following Thursday’s approval vote at the Planning Commission. (Under the redevelopment rules for the Transbay Transit District, all housing developments have to be at least 35% affordable.)

This development, currently being called Block 4 because this is Transbay Block 4 in the district plan, will have a mix of unit types including some townhouses. And uniquely for this part of the city, there will be a high number of family-sized apartments, with 52 three-bedroom units and 105 two-bedroom units.

“This building, these homes, are part of the city’s recovery strategy,” says Housing Action Coalition Executive Director Corey Smith, speaking to the Chronicle. “We all want to attract more people downtown and one of the best ways to do that is to attract new residents.”

And in a statement, Doug Shoemaker, president of Mercy Housing — Hines’ non-profit partner in developing the affordable units — says, “We are excited to bring family housing to this part of the city.”

A six-story podium structure will serve as the base for two 16- to 17-story towers as well as the main, tallest tower. The podium will also contain about 20 townhouse units. The site is bounded by Howard, Folsom, Beale, and Main streets.

Renderings for the project, which is being designed by Solomon Cordwell Buenz and Kennerly Architecture and Planning, shows a large portion of the site being used for green space.

Also, the top is pretty.

Currently, the 3.5-acre site is home to The Crossing at East Cut, which debuted last fall with a beer garden, exercise area, pickleball court, mini soccer fields, and more. That will get to live on the site into next year, and Hines is saying that they plan to break ground on the housing development in late 2023 or early 2024.

And yes, they’re still trying to make “East Cut” happen as the name for this section of SoMa next to the Transit Center that used to just be called Rincon Hill, or just SoMa.

Block 4 will bring a significant number of new residents to the area, and to date the Transbay Transit District has brought 2,200 new housing units to the neighborhood, per the Chronicle.