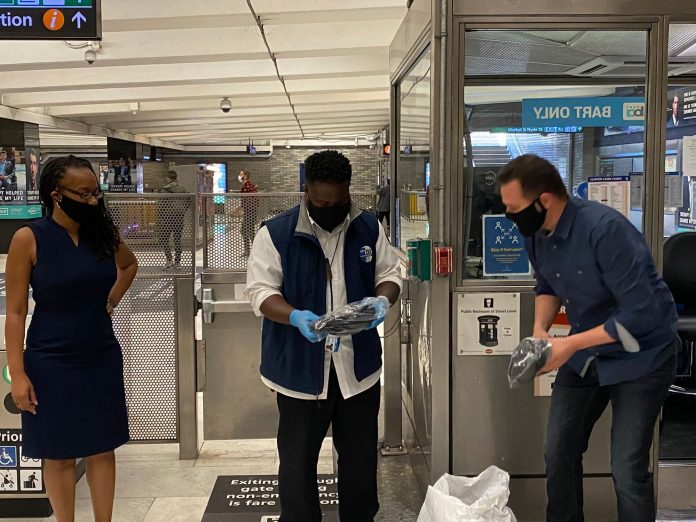 One Bay Area transit agency is acknowledging that COVID-19 is still very much with us, as the BART board voted Thursday night to reinstate the mask mandate until at least October 1.

If you’re like me and consistently baffled by/infuriated with Bay Area government and civic officials’ bizarre urgency to pretend the pandemic is over, you’ll be pleased to hear that finally some authorities are acknowledging reality. KGO reports that BART has reinstated the mask mandate effective immediately at a vote during Thursday night’s board meeting.

Face masks are once again required on BART.

The Board of Directors voted to require face masks effective immediately until 10/1/22.

The board will decide if the mandate should be extended beyond 10/1 on 9/22.

Please wear well fitted masks that cover both your nose and mouth. pic.twitter.com/Nk6Hl5Na1R

“The BART Board of Directors has voted to reinstitute a face mask requirement effective immediately until and inclusive of October 1, 2022, unless further extended by the board,” BART said in a Thursday night announcement. “The temporary amendment to the District’s Code of Conduct requires riders to wear face masks that fully covers a person’s nose and mouth in paid areas of the system with limited exceptions. This requirement applies to trains and all portions of stations beyond the fare gates.”

“Free masks are available at station agent booths and from all safety staff for those who need one,” the announcement says, and adds that “Children ages two and under as well as people with medical conditions that prevent them from wearing masks are exempt from the mandate.”

The mandate hadn’t expired very long ago. The most recent BART mask mandate had only expired eleven days prior, on July 18, and it had previously only been nominally lifted for a few days in April after that federal judge’s decision to let masks come off on airplanes.

During Thursday’s board meeting, the BART Board of Directors voted 6-2 to reinstitute a mask mandate in paid areas of the BART until Oct. 1, effective immediatelyhttps://t.co/rKdRCfWRXF

The vote was not unanimous, and there was dissent. As the Daily Cal notes, “directors Robert Raburn and Debora Allen voted against the mandate, alleging a lack of data on the efficacy of masks.”

I’m alleging a lack of Raburn and Allen being able to just fucking Google it.

The evidence is pretty clear that San Francisco is still in a bad place with COVID-19, and the recent laxness with precautions has likely played no small part. As seen above, SFDPH data show the current hospitalizations levels aren’t necessarily catastrophic, but still one of highest rates we’ve seen during the entire duration of this whole unpleasantness.

Sure, there is some evidence that the current surge may have peaked. But given the Groundhog Day cycle of infection-rate declines and reemergences, the decision to mask back up on BART seems more common sense than abundance of caution.

Related: COVID Hospitalizations Climb Back to February Levels In Bay Area and California; Cases May Be Headed For Another Peak [SFist]