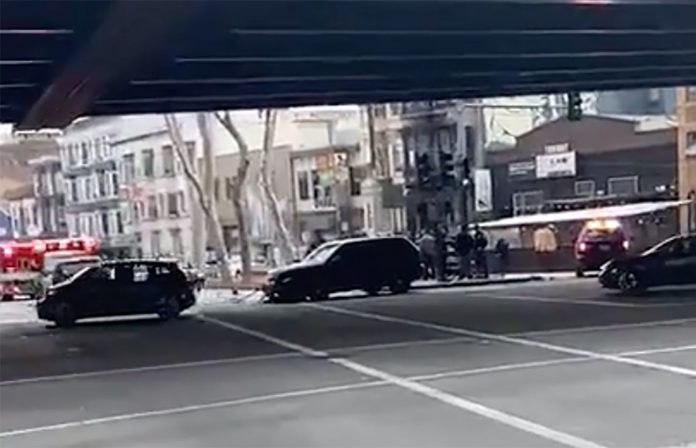 An East Bay man is in custody following the brazen theft of an unmarked police vehicle at Union Square on Thursday, which ultimately led to a chase through SoMa and a crash at Mission and Duboce.

The incident began on the 200 block of Geary Street near Union Square, where the suspect jumped into an unmarked, SFPD-owned SUV and took off with it at 5:57 p.m. on Thursday. As KPIX reports, offers spotted the vehicle minutes later, around 6 p.m., near the intersection of Market and 9th streets. Those officers attempted a stop, but the suspect took off again, and a chase ensued.

The SFPD then says they “terminated pursuit” at Mission and South Van Ness, but the SUV was then involved in a collision at Mission Street and Duboce Avenue, after apparently running a red light.

A patron at the Crafty Fox bar nearby tells the SF Standard that he witnessed the crash, and he ran out to direct police to the suspect — who he says got out of the vehicle appearing bloody and then tried to hide in a nearby tent. Police quickly apprehended him.

Three people in the other vehicle that was involved in the collision were injured and treated for non-life-threatening injuries.

Police have identified the suspect as 36-year-old Sidney Hill of Dublin, and he was booked on charges of stealing a vehicle, possession of stolen property, and possession of a controlled substance.

This was the second collision in two days to stem from an SFPD chase on downtown streets. The first occurred on Wednesday following a road-rage incident in the Marina in which a suspect fired a weapon, took off, and was then spotted downtown and pursued by police before crashing into another vehicle at Market and Front streets.