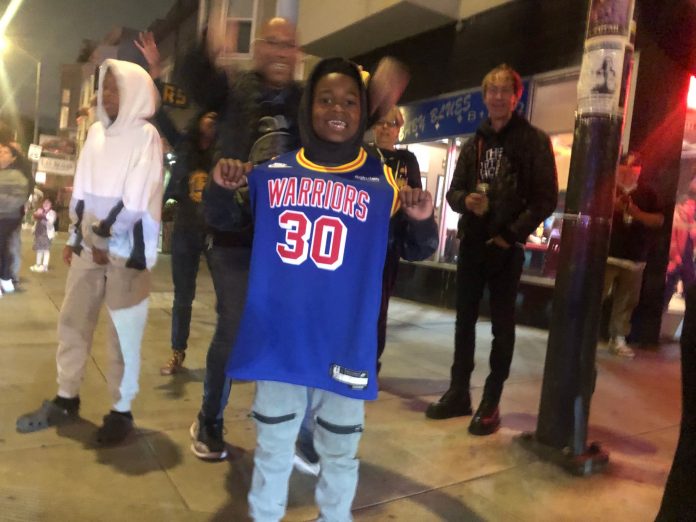 As Warriors Win Title, Mission Street Gets Its Fireworks, Bedlam, and Celebrations On

Mission Street did its thing on Thursday night after the Golden State Warriors championship victory, and we’ve got pictures and video of the fireworks, street parties, and joyful pandemonium.

There will be much more to say in the days to come about your Golden State Warriors’ Game 6 championship win over the Boston Celtics Thursday night, and the early word is that the championship parade will be on Monday, June 20.

But the first order of business when a Bay Area sports franchise wins a championship is always the Mission Street mayhem, and Thursday night, the Mission District thoroughfare did not disappoint.

There were fireworks of course, but no incidents or burning things or flipping cars that had marred previous celebrations.

This is the scene in the Mission District now, following the @warriors win.

There was a smattering of sideshowing as seen above, but largely, police blocked major Mission Street intersections from traffic.

A drum corps gathered at the intersection of 24th and Mission Street, drawing a crowd and belting out a several-minutes-long “Let’s Go Warriors” cadence.

But police blocked off Mission Street from 26th Street and northward, leaving the street to pedestrian fans reveling with their fireworks and open containers. There were apparently other strategic street closures elsewhere in town.

Wow. San Francisco has closed downtown to vehicles coming from the East Bay, but the exits from the Peninsula remain open. 👀 https://t.co/kTEdNGz2Rm

In other words, a fairly well-controlled Mission Street celebration, as there was little damage or vandalism, and the neighborhood is not waking up to tagging, graffiti, and broken windows. And considering this is the Warriors’ fourth title in eight years, we’ve kind of got this routine down pretty well.