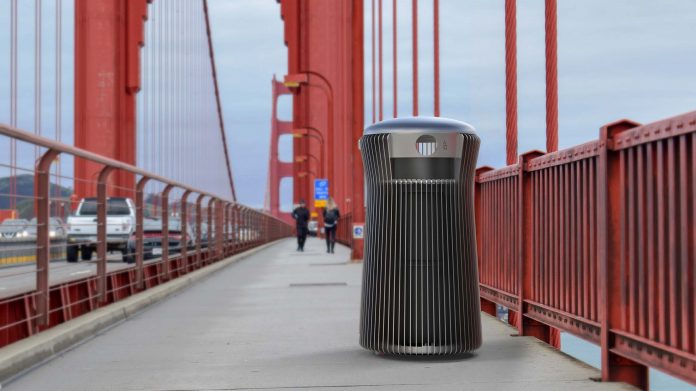 Behold! Your $20,000 Trash Cans Have Arrived In SF and Are Now At Your Disposal

Your designer-label “smart” trash bins finally hit the streets of SF this week after a year of mockery over their exorbitant cost, and you can submit your thoughts on them — with a smartphone-enabled QR code of course.

If you thought it was peak San Francisco when we discovered a year ago that City Hall was contemplating $20,000 trash cans, now consider an even higher peak; whipping out your smartphone and snapping a QR code of a trash can so you can complete an eight-item questionnaire on whether that trash can effectively did its duty as a trash can.

Now, in fairness, these wildly expensive wastebins are prototypes (they would cost $2,000-$3,000 apiece as mass-produced units), and we soon learned that some of the prototypes would cost as “little” as $12,000 apiece. Yes, that still seems beyond the ‘pail’. So this past May, Public Works also started considering already-existing designs described as “off the shelf” trash can models that were not custom-designed specifically for San Francisco.

Well San Francisco, the picks of the litter have arrived! The Chronicle reports that the six new models of trash cans have finally arrived for testing on San Francisco streets and sidewalks.

"A high-cost beauty contest is about to start on the streets of San Francisco."

"The winner could be San Francisco’s next trash can."

Or have they? Yes and no. The Chronicle also adds that a “delivery delay meant the last couple cans, which were supposed to be installed Monday, won’t be on the streets until Thursday.” Still the paper says that installation will be completed this week, each prototype will be tested in two different locations during the 60-day pilot.

The folks at Public Works have provided the above map of where to find the new trash cans in San Francisco. Orange and gray dots show the locations of the fancy custom-designed trash can with names like Salt and Pepper, Slim Silhouette, and Soft Square. The green and yellow dots indicate the locations of the more affordable “off the shelf” models, dubbed BearSaver, Ren Bin, and Open Wire Mesh.

Why are they making it so complicated to just put out trash cans? As Public Works explains in the video above, they’re trying to find “A trash can that works for the city of San Francisco.” That’s why they contracted out their own pricey custom designs, even though an existing model may end up scoring better. The goal, as one Public Works employee says (with a completely straight face), is that “You can remove garbage in a really beautiful way.”

You are not the only person eye rolling at that statement, and/or the accompanying $537,000 price tag of just this pilot program. “It’s always seemed a little nuts,” Supervisor Aaron Peskin told the Chronicle. “This is the United States of America…You would think there is an off-the-shelf model that fits our needs.”

This saga is also tainted by the dumpster fire that was the Mohammed Nuru public corruption and bribery scandal. In 2018, Nuru handed a $5.2 million trash-can maintenance project to a company owned by the son of Walter Wong, a permit expediter who pleaded guilty to fraud and money laundering in the early days of the Nuru affair. That company is now barred from doing business with the city.

So the new trash cans are here, and as mentioned above, they come with QR Codes that you can snap and pull up an online public survey during what Public Works described as a “60-day test period.” So you too can help decide which of these trash cans will remain in SF streets, and which will face to the garbage heap of history.

Related: SF Supes Consider New Custom-Designed Trash Cans That Cost Up to $20,000 Per Can [SFist]