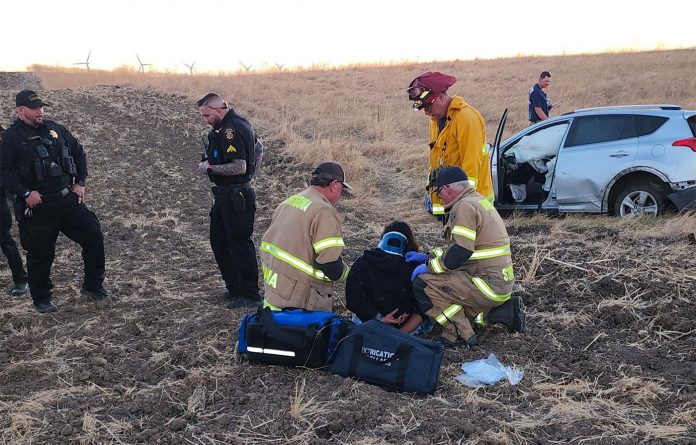 A woman wearing no pants who was a suspect in a Marin County carjacking was spotted by authorities in the Delta town of Rio Vista on Friday night, and she gave chase, leading to a multi-agency response.

As the Vacaville Reporter explains, the incident unfolded Friday after Rio Vista police spotted a Toyota Rav4 on the city’s camera system that matched a vehicle reported stolen in a violent carjacking in San Rafael. In that earlier incident, the car’s female owner was dragged behind the vehicle and apparently injured.

Rio Vista officers then approached the vehicle near the intersection of Esperson Court and Drouin Drive, at which point, according to police, “the driver rammed one of our officer’s vehicles and fled westbound on Highway 12 out of town.”

A chase ensued also involving Solano County sheriff’s deputies, and according to police, “the driver went off the road several times, popping one of the Toyota’s tires.” The suspect in the Rav4 then “continued driving on the flat tire until it rode on just the rim of the rear wheel.”

At that point, the car got “stuck in a field on the north side of SR-12 west of 113.” Officers awaited backup from the CHP and the sheriff’s office — and then they awaited further assistance, because of the condition of the suspect when she got out of the car to surrender.

A photo from the incident posted to Facebook by Rio Vista Police indicated that the Rav4’s airbags also deployed.

According to a Facebook post about the incident, “officers felt it would be wise to have the Montezuma Fire Protection District and Medic Ambulance Service check her out because the woman exited the car without her pants.”

The suspect has only been identified as a 32-year-old Tracy woman who was on probation for car theft.

After an examination at a local hospital, she was booked into Solano County Jail on multiple charges.

“We would like to thank our law enforcement and medical first responder partners for their assistance in the safe apprehension of a dangerous suspect,” the Rio Vista Police Department said.

Facebook
Twitter
Pinterest
WhatsApp
Previous articleTrial Kicks Off In 26-Year-Old Kristin Smart Murder Case
Next articleBehold! Your $20,000 Trash Cans Have Arrived In SF and Are Now At Your Disposal