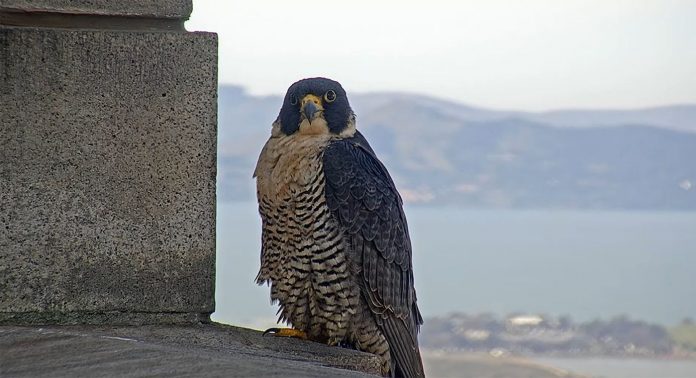 Surprise! The Berkeley falcon soap opera takes another twist! After declaring her likely dead or gone forever earlier this week, the birdwatchers and falcon experts who keep tabs on the peregrine falcon nest atop the UC Berkeley Campanile couldn’t believe their eyes on Tuesday when Annie suddenly just showed up again. And she looks perfectly healthy and ready to lay some eggs.

“Uh… this is something we’ve never seen before,” the CalFalconCam Twitter account said Tuesday. “We’ve never, in our years of monitoring Peregrine nests had a female disappear during the peak of breeding season and reappear a week later like nothing had changed. Especially with so much competition around.”

Annie popped right back up at her preferred perch on the Campanile Tuesday, just a day after the Cal Falcons group went public with the news that no one had seen her for over a week — and that other juvenile “floater” females were popping up to potentially court Annie’s mate of five years, Grinnell, and take over this prime territory.

Uh… this is something we've never seen before. Annie is… back!

We've never, in our years of monitoring Peregrine nests had a female disappear during the peak of breeding season and reappear a week later like nothing had changed. Especially with so much competition around. pic.twitter.com/UXz4dQTaqw

As Mary Malec, a volunteer ornithologist who regularly reports on the activities in the falcon nest, tells Berkeleyside, it’s completely unheard of for a female peregrine to simply disappear and leave her nest unattended for a week — they’re predictable creatures, Malec says.

“They are very good parents, they’re very protective of their territory, and once they have eggs and chicks, they will defend their territory. They’re known to be faithful to their site more than to their mate. And they don’t just willy-nilly leave their mate,” Malec tells Berkeleyside.

She adds that many people had their eyes on the three cameras that monitor the Campanile nest, and “it’s not like we missed something” during Annie’s absence. “I don’t know what to say. I’m flabbergasted. I’m humbled. I am humbled. We don’t know why this happened,” Malec says.

So what are the possible explanations? Lynn Schofield, another Cal Falcons ornithologist who spoke to Berkeleyside about Annie’s unexpected return, speculated that there was some small possibility that Annie saw the competition from other females in the midst of the Campanile, and somehow “decided” to remove herself from the situation for a few days. But this is probably too much anthropomorphizing, and no one seems to have any idea what could have happened.

All we know is that Annie and Grinnell are back to their courtship rituals today, and we seen bowing to each other in the nest itself, where Annie has been preparing an indentation in the gravel for her next clutch of eggs, which typically she’s laid in the month of March. “This courtship behavior helps strengthen the pair bond and is one of the key courtship behaviors seen during the breeding season,” Cal Falcons writes on Twitter.

Annie and Grinnell performing a head bow display today. This courtship behavior helps strengthen the pair bond and is one of the key courtship behaviors seen during the breeding season. pic.twitter.com/SWq2rLqrYM

Malec points back to the trauma of the late fall, when Grinnell disappeared from the nest for several weeks after suffering an injury in what seemed to be a territorial battle with another falcon, or a pair of them. Annie began courting with another male during that time, but that male — as well as the females seen with Grinnell in the last week — have all disappeared for now. But things seem to be turning back to normal, and we could see a sixth clutch of eggs from this prolific pair in the coming weeks, right on time.

“It’s like they are an almost-new couple that has to get to know each other again, to start talking to each other, and to go through the necessary rituals so that she’ll start producing eggs, and he’ll respond in the right way,” Malec tells Berkeleyside. “They might need some time to get comfortable again.”

The Cal Falcons Twitter account remains contrite about the premature announcement of Annie’s demise on Monday. (Speculation was that Annie was likely injured in a fight or while hunting for food in downtown Berkeley, and the romance with Grinnell was abruptly over.)

“We have to take a moment to sincerely apologize, but this is something that is totally unexpected and goes against pretty much everything we’ve seen,” the group says. “She still may face competition from the new birds in the area, but Queen Annie appears to be back.”