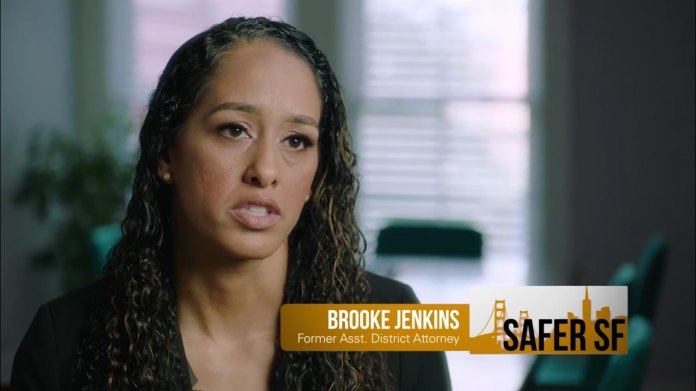 Breed to Name Brooke Jenkins, Face of the Recall Ads, as Boudin’s Replacement In DA’s Office

It’s a win for diversity in the DA’s office, but certainly raises quid quo pro questions, as Mayor London Breed will reportedly appoint the star of many anti-Boudin ads Brooke Jenkins as the new district attorney.

Only two days from Mayor London Breed’s legally mandated date to appoint a new district attorney, after the early June recall of Chesa Boudin, Breed kept us waiting until the clock had almost run out. But the Chronicle and multiple other sources are reporting Thursday afternoon that Breed will appoint former assistant DA Brooke Jenkins to the position.

You may recognize Brooke Jenkins’ face from the recall TV ads and mailers (one of which is seen below). Because she was in the recall ads that mostly featured recall staffers. Jenkins is Black and Latina, and in that sense harkens back to the diversity of former SF DA Kamala Harris’s era. But it sure raises questions on Jenkins’s motives for joining the recall campaign, and whether her appointment was a quid quo pro for doing that work.

The SF Standard reports that “Breed is expected to swear [Jenkins] in on Friday—Boudin’s last day in office after voters recalled him in a historic election last month.”

“I would like every San Francisco voter to be aware that Mrs. Jenkins is not progressive and tried very hard, at great taxpayer expense, to send a severely mentally ill man with no record, and no history of violence, to state prison for the rest of his life." https://t.co/oVUUT9W6AV

Jenkins used to work for Boudin as an assistant DA, but very publicly left the office — and quickly went to recall ads — over Boudin’s decision in an Easter 2020 murder case where the jury deadlocked 7-5 on an insanity plea, and Boudin chose not to fight it and resubmit the case.

“You simply can’t ignore the victims in a case,” Jenkins told the Examiner at the time. “This case could have come down with the jury finding him insane and I would have been fine with that.”

Of course, we do this whole DA election thing again in November, as there is another race for San Francisco District Attorney on November 8. Boudin has indicated he may run again.