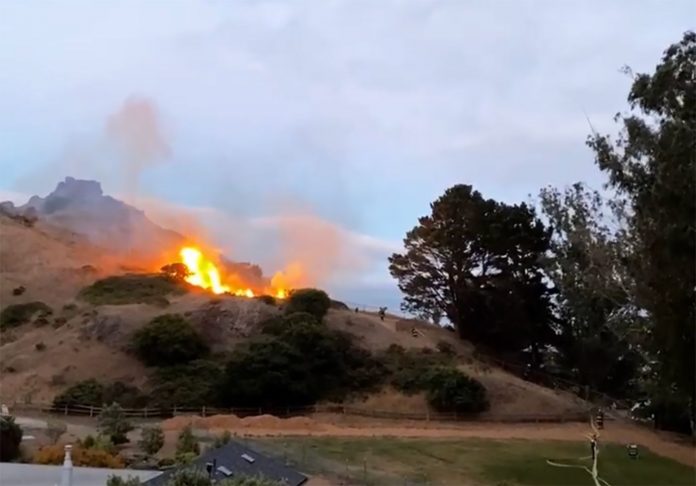 Stop lighting San Francisco on fire please! The last thing we need this fire season is wildfire on our actual doorstep in SF proper, but we’ve had two of them, likely both caused by fireworks, in just the last two days.

A fire broke out around 8:45 p.m. Wednesday evening that could be seen all across the city, burning as it was on the highly visible hill in Corona Heights Park. Thankfully it wasn’t a particularly windy night, and the flames were quickly extinguished by one SFFD fire engine.

The hill behind my house in the middle of San Francisco is on fire, no doubt thanks to fireworks. @SFFDPIO @KCBSRadio #CoronaHeights #SanFrancisco pic.twitter.com/e8xyO6oS9R

It’s still scary to see brush fires like this so close to densely populated neighborhoods — not to mention neighborhoods with narrow goat-paths for roads that will not make for easy exits if a serious blaze ever erupted, a la the Oakland Hills firestorm.

A similar and also small fire broke out on Twin Peaks, near Twin Peaks Boulevard, on Monday evening, July 4 — right around the time people were setting off illegal fireworks all over the city. The cause of that fire is still under investigation, as is the Corona Heights fire, per the SFFD, but it’s not hard to make a leap as to how these things happen — while people still have leftover fireworks and were still shooting them off Wednesday night.

This was an especially aggressive July Fourth in SF, by most accounts, with a reported melee in the Mission and approximately seven straight hours of kabooms in multiple neighborhoods.

Thankfully the city didn’t go completely up in smoke.