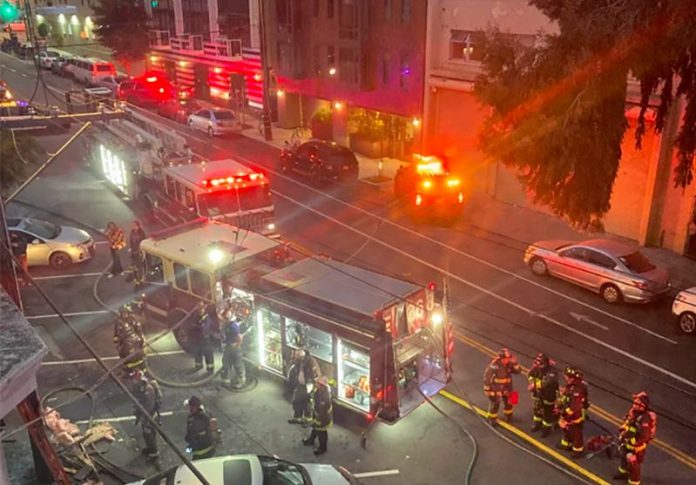 Could SF Have Another Toilet Torcher? Porta-Potty Fire on McCoppin Threatens Buildings

Way back in 2009, a string of porta-potty arsons led SFist to nickname the perpetrator the Toilet Torcher. And any time a new incident of porta-potty torching arises, we still have to wonder, are they back?

A Reddit user documented the response of the SF Fire Department around 5 a.m. on Thursday, as they arrived to put out an apparent porta-potty blaze. The incident happened on McCoppin Street, the short street between Valencia and Gough/Otis, in that borderland between the Mission and SoMa.

“Woke up to chemical smoke and fireman yelling. Looked out of my window at 5am and saw this — the result of a porta-potty explosion right next door,” says Redditor Boring_Ghoul_451.

Redditors speculated it could have been a homeless person cooking/using drugs, or a teenager. But another commenter noted seeing a “melted-from-the-inside porta-potty” just a day earlier in the Castro. Do we have another toilet torcher at work?

The original 2009 porta-potty arsonist was either never caught, or it was this 62-year-old homeless woman named Fafa Chan who was arrested in August 2009 after being seen on surveillance video setting fire to a car — there was also a car arsonist at work around then, and media reports suggested she had been both the Carsonist and the Toilet Torcher, though this was never confirmed.

The arsons did seem to stop after her arrest, though there was another porta-potty blaze a few months later in Pacific Heights, and then another in Laurel Heights just a month after that. We wondered in 2012 and again in 2015 after similar incidents if we just had a copycat on our hands — and a Redditor also points out that this is a favorite prank of some ne’er-do-well teens, so it could just be that happening every few years.

Let’s hope it’s not a serial situation, because that could get real shitty, real fast.