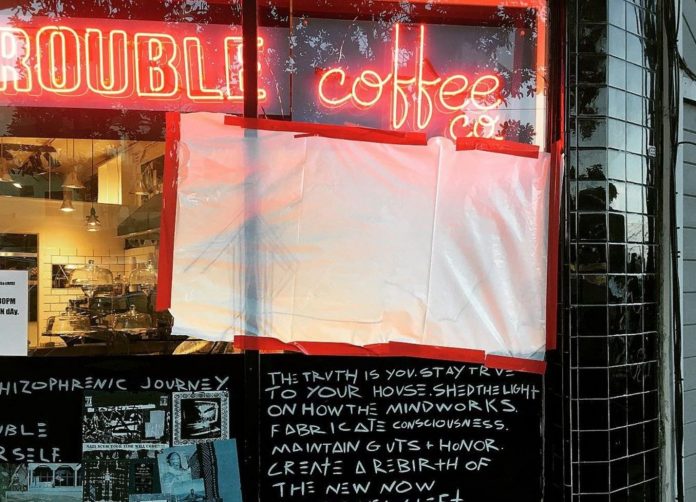 Trouble Coffee, Which Helped Launch the Artisan Toast Craze, Has Closed After 15 Years In the Outer Sunset

A beloved and eccentric business out in the Avenues has called it quits after 15 years, and we should all take a moment to mourn it.

Trouble Coffee, a unique coffeeshop that served as a path to mental and financial stability for its owner, Giulietta Carrelli, and meanwhile became touchstone business for one of San Francisco’s most foggy, quirky corners, has closed. Carrelli hasn’t commented publicly on the closure, but as the Chronicle reports, she personally handed the space at 4033 Judah Street off to neighbors Laura Seymour and Colin O’Malley, who operate DamnFine Pizza — which opened in January 2021 — and the nearby Sunset Cantina. Seymour and O’Malley plan to open DamnFine Coffee in the space, continuing to serve coffee and toast and some other items, but things will be quite different than at Trouble Coffee.

By the time “$4 toast” became a mantra and an oft-repeated symbol of everything that was wrong, overly precious, and overly gentrified about San Francisco a decade ago, Carrelli had been making thick slices of cinnamon toast for her customers for about five years already. And no one was complaining.

As Carrelli explained in an episode of This American Life from 2014, there was never anything precious or artisanal about Trouble Coffee. The business, and its idiosyncratic menu of coffee, young coconuts, cinnamon toast, and grapefruit juice, grew out of the mental-health episodes Carrelli had had since she was a teenager — something she’d always just referred to as “trouble” before it was diagnosed as schizoaffective disorder in her early 30s. Food seemed like poison to her when the trouble set in, but coconuts were oddly one of the few things she could stand to consume — and they’re fairly nutritious as along as you get some vitamin C as well, hence the grapefruit juice.

As for the toast, she explained, “My mom used to make me toast. And so when I was first opening up Trouble, I wanted to feel safe. Toast was that for me. And I also knew it was going to be that for a lot of people. Nobody can be mad at toast. I mean, it’s toast. It’s cinnamon toast. Everybody’s stoked.”

It started with coffee because that seemed like a business she could handle, with zero experience. She had been working, and sometimes sleeping in, a coffeeshop elsewhere in town, and her boss there gave her the advice about opening her own shop which was all she needed: “He was like, just get some cups, brew some coffee. When you run out of cups, close the door and go get more cups.”

Trouble Coffee opened in 2007 as The Trouble Coffee and Coconut Club, and soon gained a following. Carrelli, with her face tattoos, and other tattoos, and outfits that usually included a crop top, said that she looked the way she did in order that people would recognize her — and maybe help guide her home if she was having a bad episode. And the coffeeshop was part of that self-preservation plan, too.

“There’s just so many people connected through this network of Trouble Coffee. I may just be a little tiny place, but it’s pretty well-known, because I need to be well-known,” Carrelli told This American Life. “I mean, I was just walking to my house before you guys got here. And it was this man with his son, and he goes, hey, you’re Trouble, right? And I just went, I sure am.”

It would be five years between Carrelli’s first cinnamon toast orders and the trend that would get traced back to her — in part through higher-profile, more bougie businesses like The Mill. Josey Baker, the owner and baker at The Mill, gave the credit to Carrelli, telling This American Life that’s pretty much where to look for the $4 toast origin story — even though Trouble’s toast was always a bit cheaper.

Now it’s almost quaint that people were grousing about toast ten years ago — and most of them, likely, hadn’t even tried Baker’s or Carrelli’s toast, they were just complaining on the internet about the very concept of expensive toast, ignorant of the wonders — or price — of good, thick-cut, toasted fresh bread and delicious toppings.

The reasons could be many for Trouble closing, and we shouldn’t speculate — the coffeeshop tried to expand in the last decade with locations in the Bayview and in West Oakland, but both of those have since closed, and in January the business was vandalized, with a window and some neon that had to be replaced.

At the upcoming DamnFine Coffee, you can expect cinnamon and avocado toasts on focaccia bread, Seymour tells the Chronicle, as well as pizza by the slice. Also, pastries from Black Jet Baking Co. — which made some headlines for itself this week with its gleefully profane cakes protesting the Supreme Court’s Roe v. Wade overturning.

DamnFine Coffee opens this weekend, and you may recognize some of Trouble’s employees, who will be back working behind the counter.

Related: The Eight Best Slices Of Toast (That Like Ruined San Francisco Or Whatever)