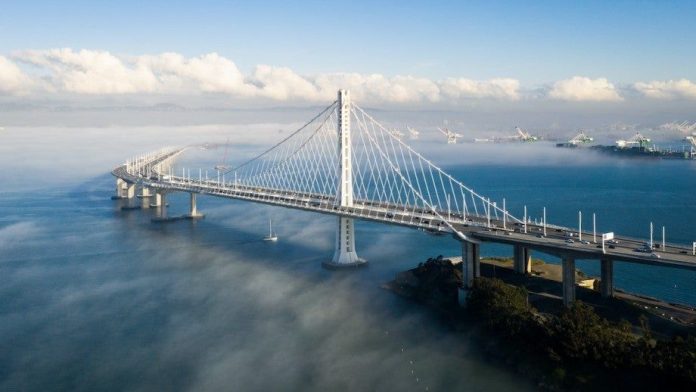 The wreck happened around 8:30 a.m. on the lower (eastbound) deck of the bridge, near the Treasure Island offramp.

Several news outlets reported that the crash involved seven to eight vehicles, but Officer Mark Andrews with the California Highway Patrol San Francisco Division told SFist there were actually only 3 cars that crashed. The rest of the cars that stopped, he explained, were witnesses or people who pulled over to assist.

All lanes were back open as of around 10:00 a.m., but residual delays were expected.

Officer Andrews explained two of the three vehicles wound up sitting horizontally across multiple lanes, blocking them. The cars were completely disabled and had to be towed out, which is what kept the lanes blocked for so long.

The CHP says the crash is still under investigation, but it appears a driver making an unsafe turning movement may have led to the crash, or at least was a factor.

No one was seriously hurt, though one person was taken to the hospital after complaining of some pain following the crash.

Facebook
Twitter
Pinterest
WhatsApp
Previous articleHeads Up, ‘Breaking Bad’ Fans: Bryan Cranston and Aron Paul Are In SF Doing a Mezcal Promotion
Next articleChase Center Announces It Will Open for Indoor Viewing of Away Games During NBA Finals