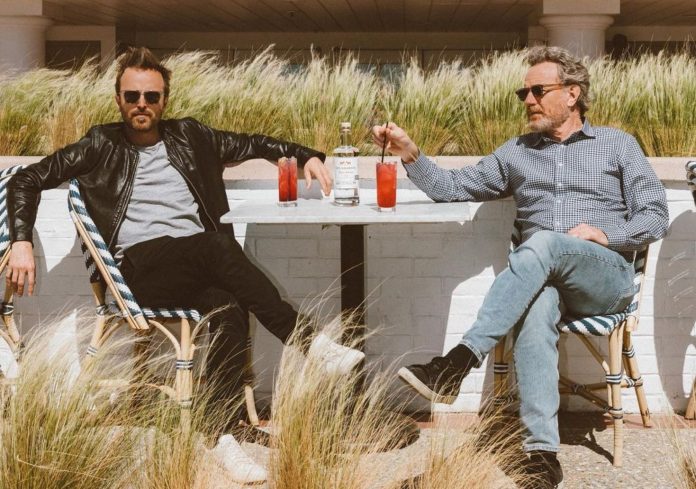 Superfans of the show Breaking Bad might want to rush on down to SF’s Ferry Building to get a glimpse of stars Bryan Cranston and Aron Paul, who are both doing a quick signing of bottles of their mezcal, Dos Hombres.

Cranston and Paul are just the latest in a parade of celebrities with their own spirits brands, and Dos Hombres, launched in 2019, is a high-end mezcal brand that’s produced in the remote Oaxacan village of San Luis del Rio. According to a release from last year, when beverage giant Constellation Brands took a minority stake in the company, the mezcal is “made with hand-selected Espadín agave that are cooked in underground pit ovens, milled by donkey-drawn tahona, fermented for 7-10 days with mountain spring water, and double distilled in copper stills.”

The brand is currently selling a six-year aged mezcal for $65 a bottle, and the 25-year-old Tobala mezcal for $349 a bottle.

As the story goes, after Breaking Bad went off the air, the two actors were sipping cocktails one day in New York discussing how they might be able to continue working together on something, and the mezcal idea was born.

“We have fallen in love with all things mezcal – the process, the community behind the spirit, the tradition,” said Paul in a statement. “We were just two guys on a quest to find a spirit that we felt everyone would love, and we’ve put a lot of energy into this.”

And mezcal is having something of a moment in the U.S., with other spirits categories pretty well seeing a glut of artisanal brands on the shelves, and American tastes just recently catching up to the mezcal trend. Beverage market analysts ISWR said last year that the mezcal category grew in the U.S. by 14 percent in 2020, and ultra-premium brands are expected to be the biggest money-maker.

Cranston and Paul will be at The Epicurean Trader, the high-end grocer and liquor store at the Ferry Building, at 2 p.m. Tuesday. And it sounds like they won’t be there long — they have a 3 p.m. event in Pleasanton, at Gene’s Fine Foods, per KRON4. (The events have already been removed from Eventbrite.)

Both events are bottle signings, and are “sold out,” but maybe you can snag an autograph if you’re clever.