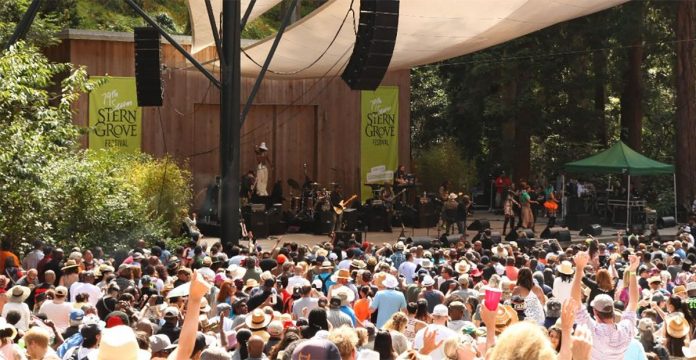 The first set of reserved tickets for this year’s Stern Grove Festival, for the upcoming season-opening concert on Sunday, June 12, go online Tuesday afternoon. And while the festival is still free to attend, you now need to reserve your spot, just like you did last year.

We’ve known since a month ago, via some ads that went up on Muni trains and buses earlier than they were supposed to, that this year’s opening day concert at Stern Grove would feature the acts scheduled for last summer’s closing-day Big Picnic Concert — which was unfortunately canceled due to a random flooding incident caused by a water-main break. Those would be beloved, 70s-famous R&B group Tower of Power, who hail from Oakland, and pioneering West Coast rapper Too $hort, who came to Oakland as a teenager in the early 1980s.

Thankfully, the cleanup of the mud and mess at Stern Grove did not, as was feared, take so long that it impacted the 2022 concert season. The project did, however, balloon in cost from an initial estimate of $4 million to an eye-popping $20 million — which the Board of Supervisors approved last month. The reasons for the much higher cost appear to be several, primarily due to an expanded scope of work — but this also probably helped bring the project in on time for this year’s festival.

An initial scope of work only involved a restoration of the meadow, removal of mud and damaged trees, and stabilization of the hillside soil. The project ended up including restoration of the buildings on site, a new drainage system and retaining walls, and a new shoring system to protect an existing sewer — clearly all with future potential flooding in mind. Additional repairs are set to be ongoing through 2023, but will not impact the festival.

June 12 will mark the first day, post-flood, that the public has been allowed back into the grove itself. To kick off the festival season, the festival’s Board Chair Matthew Goldman, Executive Director Bob Fiedler, Rec & Parks GM Phil Ginsberg will perform a ribbon-cutting ceremony and give a couple of speeches that Sunday.

Those first tickets go online here at 2 p.m. today (Tuesday). Tickets for subsequent concerts will become available on Tuesdays, twelve days prior to the concert date. Upcoming shows include Toro Y Moi on June 19, and Liz Phair on June 26. Cold War Kids and Geographer will perform on July 3, and the season closes with a Big Picnic featuring Grateful Dead founding member Phil Lesh “and friends.” See the full schedule here.

Festival organizers caution that, after the cleanup and rebuilding of the grove, capacity at this season’s concerts is going to be somewhat more limited than in the past, and reserved tickets will be required for entry. For the 2021 aborted season, a similar system was required for social-distancing purposes.

As always, reserved 10-person picnic tables are available for all the concerts at a hefty price ($5,000 to $10,000), with proceeds going to benefit the festival organization. All other tickets are free.