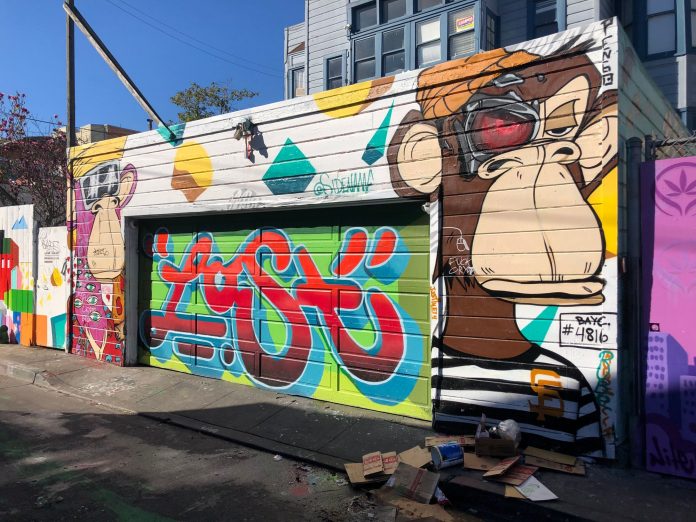 We have entered the phase where Bored Ape NFT promotions sit among the Mission Street murals, at a moment when the NFT collective behind these virtual apes is angling for a $5 billion valuation.

An extremely “one of these things is not like the other” mural just popped up among the current pantheon of Mission Street murals. Just near the 24th Street BART station, next to the “La Familia Santana” Carlos Santana mural and another owl-themed mural promoting a cannabis line called Buddy Buddy Indoor Natural, newer murals promoting Bored Ape Yacht Club NFTs adorn the walls of the little alley Osage Street.

There are a few more of these Bored Ape murals within a few blocks of the 24th Street BART, a neighborhood that has had many a dramatic episode of tech industry backlash going back to the “Queers Hate Techies” stencils and flyers, the tech shuttle protests, and more recently, a guillotine honey bear window display meant to antagonize stencilist-turned-NFT-artist fnnch.

If you’re new to this craze, NFTs (non-fungible tokens) are the new fashionable art commodity in the Web3 and cryptocurrency community. NFTs are not found framed or hanging in a museum, they are digital commodities, with their owners’ “proof of ownership” verified on the blockchain. Bored Apes are a singular breed of NFTs, as there are only 10,000 of them, but they’re currently the King Kong of the NFT market, with one selling for $2.8 million (1,080.69 Ethereum) earlier this month. While the ape-face template was created by an artist named Seneca, the collective of people who own these apes with different hats, shirts and expressions is known as the Bored Ape Yacht Club (BAYC) who call themselves “apes.”

The design may look whimsical, but the finances of the Bored Ape Yacht Club are no longer monkey business. They’re currently in negotiations with venture capital firm Andreessen Horowitz for $200 million in funding for a $5 billion valuation, as Axios reported, which would surely send the value of these things skyrocketing.

Bored Ape murals are not just a San Francisco thing — they’re popping up in New York, L.A., and Miami too. But the SF Mission District versions are created by muralist rube.zilla, and all eight are within about five blocks of one another.

“A group of 11 BAYC apes hired the same artist to put their apes up at various locations throughout the Mission District,” one of the owners justin1.eth tells SFist. “These apes initially minted at 0.08 ETH each, now the lowest listing on the secondary market [is] 99.99 ETH which is approximately $313,000. It’s been a fascinating story, to be honest.”

There has been some minor tagging on a few of these murals, no widespread defacing.

Steph Curry is now part of the Bored Ape Yacht Club (“BAYC” in his Twitter bio), a collection of 10,000 unique Bored Ape NFTs.

Snarky-ass people like me would say Bored Apes had their “jump the shark” moment when Paris Hilton and Jimmy Fallon both hyped theirs on his show last month. But snarky-ass people like me are probably wrong. As CNet explains, “There are only 10,000 of them. As more famous people buy in, that fixed supply is perceived as becoming more and more valuable.”

Despite the utopian hype, though, the market is still hardly ideal. Just last week, the NFT marketplace OpenSea, on which Bored Apes are bought and sold, got maliciously phished out of an apparent couple million dollars worth of the apes. Two weeks ago, VICE reported that “nearly all of the NFT collections created for free on the platform are spam or stolen works,” and that “OpenSea is now caught in an art thievery quagmire of its own making.”

🚨 EXCLUSIVE: Hundreds of @Salesforce employees are rebelling after the tech giant announced plans to launch an #NFT cloud.

⚠️ In an open letter, workers raised environmental and fraud concerns – and some have even threatened to quit.

Here's why the move is causing a storm. 🧵 pic.twitter.com/UpHcyEi09S

And probably the most infuriating aspect of NFTs, to the lay person at least, is the massive amount of energy consumption their blockchain sales require. The Verge reported last year that “The process is incredibly energy inefficient on purpose,” and that “Ethereum uses about as much electricity as the entire country of Libya.” Certainly the cryptocurrency companies are exploring ways to become greener. But when you introduce a technology that you know uses millions of tons of carbon dioxide emissions, and then say you’ll remedy this later… what the hell kind of ‘move fast and break things’ shit is that?

The sector does seem to realize it needs to clean up its act in that regard in order to grow. And it is growing. The auction house Christie’s sold a $69 million NFT last year by the artist Beeple.

“It’s a bit of a paradigm shift,” Beeple told the NY Times “Sway” podcast after that sale, describing how NFTs differ from conventional art. “You look at a painting, somebody buys a painting, they go lock it away in their house. You never see that again. So I think that’s where this is a huge, huge advantage of this digital art over traditional art.”

These new artworks in the Mission do not appear to break any of the “unwritten rules” of murals. They appear to have the property owners’ permission, they’re not slathered in QR codes or any kind of sales pitch to sell you something, and they’re certainly being enjoyed by more people than they would be if they were locked in some sort of private crypto wallet on the blockchain.

But it may or may not be a coincidence that they appear at the same moment that the Bored Ape Yacht Club is asking Silicon Valley for a $5 billion valuation, which would certainly benefit the apes’ current owners. What is certain is that NFTs will probably emerge replicated on more and more murals, in the Mission District and beyond, and we’ll see if the broader street art community is willing to tag along.