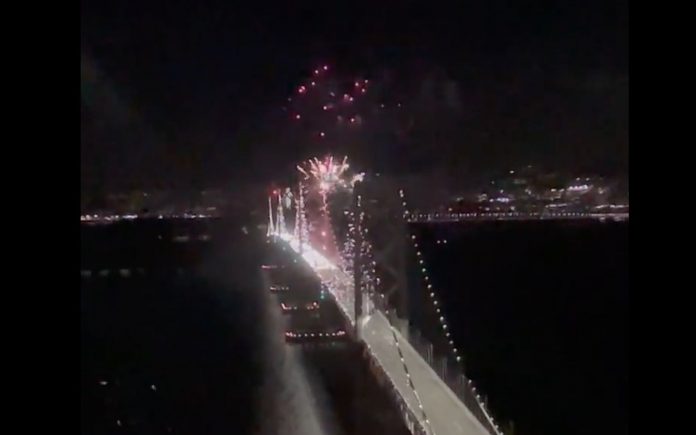 A group of vehicles stopped traffic on Tuesday night and set off some fireworks in the middle of the upper deck of the Bay Bridge, and who can be mad at that?

The rogue fireworks display happened in the middle of the western, SF-bound spans of the bridge, past Treasure Island.  And it was well documented on social media, particularly by people with enviable Bay views from their apartments.

As KPIX reports, the show lasted about four minutes, and then traffic cleared up.

someone just set fireworks off on the bay bridge 😂 pic.twitter.com/4VTNMrq2xF

Quite a scene tonight on the western span of the Bay Bridge heading into San Francisco, as traffic came to a standstill for an unsanctioned & illegal fireworks display. After the "show" traffic was let through.
(Video: @bayareafire343 ) pic.twitter.com/APQ3RF08uf

Bruh people are wild. Why they just let off fireworks on the bay bridge?? pic.twitter.com/PocdqXSKxq

Some drivers may have been annoyed, and the CHP may be looking to arrest some “suspects” in the case, but mostly everyone who saw this happen was just a little more delighted than they would have been if they hadn’t seen it, and no one got hurt.

Nonetheless, CHP says in a statement that emergency dispatch was “flooded” with 911 calls.

No arrests have been made.

No idea why there were fireworks from the bay bridge, just happy they happened.

Life is so damn good, keep it coming! pic.twitter.com/7s3ylaTDfW