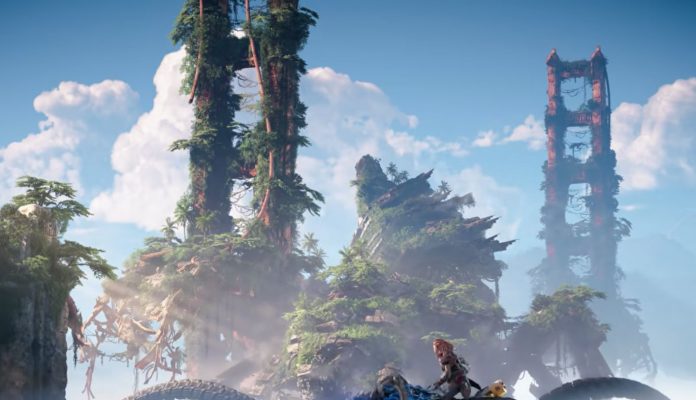 It’s probably not a wildly accurate prediction of what will happen to Northern California in 1,000 years. But a new PlayStation game by Sony-owned Guerrilla Games depicts San Francisco and some other parts of the state as they might appear without so many humans, in a distant future well populated by threatening robotic dinosaurs.

Horizon Forbidden West, released last week by Sony Interactive Entertainment, is the latest in Guerrilla’s Horizon series, which began with 2017’s Horizon Zero Dawn. The earlier game was set in the post apocalyptic Rocky Mountains, Yellowstone National Park, and in the ruins of Denver, and featured stunning graphics of roving machines — giant, animatronic dinosaurs and other creatures — who are the dominant species in this future world.

Flying in to San Francisco in 3022, in ‘Horizon Forbidden West.’ Courtesy of Sony Interactive

Like the earlier game, Horizon Forbidden West is a first-person, single-player game that allows the player to control Aloy, the heroine and hunter on a quest through dangerous lands.

“In a lush, post-apocalyptic world where nature has reclaimed the ruins of a forgotten civilization, pockets of humanity live on in primitive hunter-gatherer tribes,” said the description of Horizon Zero Dawn. “Their dominion over the new wilderness has been usurped by the Machines – fearsome mechanical creatures of unknown origin.”

The second game moves further west to the Bay Area and other parts of Northern California, including Yosemite and the Big Sur area. And in the grand map of the game, which a user is allowed to broadly explore, the ruined remains of an overgrown — and very lush and tropical-looking! — San Francisco is just one small piece that Aloy can run through and do stuff in. In the video below, the trip across SF starts around the 25:20 mark.

The first trailer for Horizon Forbidden West, showing the ruins of the Ferry Building and the Palace of Fine Arts underwater, came out last June, and you can see that below, along with a newer trailer that features some more HD graphics, especially the shot of the broken and plant-covered Golden Gate Bridge.

“Everywhere I look, the world is dying,” says the narrator in the game, in the voice of Aloy.

“The Old Ones perished a thousand years ago. Their great cities turned to graves. In their place came new life … then new dangers.”

The landscapes of the game are far from bleak, despite the premise.

“One of the things I love about both games is that they’re beautiful,” says Guerrilla developer Ben McCaw, who served as narrative director for the game, speaking to the SF Chronicle. “But it’s not without sadness, and that’s the juxtaposition we really like.”

The ruins of the Golden Gate in ‘Horizon Forbidden West’, via the Accolades Trailer. Courtesy of Playstation/Sony Interactive

And, indeed, maybe this is sort of a rosy imagining of what the world of Northern California could look like after 10 more centuries of climate change. The Chronicle spoke to a few climate experts who think it might not look so lush, though Ben Strauss, CEO of Climate Central, tells the paper, “I especially appreciate showing how vegetation could change. That’s hard work, and little appreciated. The future of California, later this century and the next few, probably involves a lot less forest and a lot more grassland as wildfires increase and more evaporation from hotter weather makes water scarcer.”

Sea-level rise of this magnitude is not what’s being predicted, though experts suggest that we could see six to 15 feet of ocean rise by 2150, which will be catastrophic enough.

The Chronicle also got a comment on the game’s depiction of SF from Larry Goldzband, executive director of the San Francisco Bay Conservation and Development Commission. “We don’t foresee this happening, let’s just get that straight,” Goldsband says of the game. “It does provide people an incentive to talk about rising sea levels.”