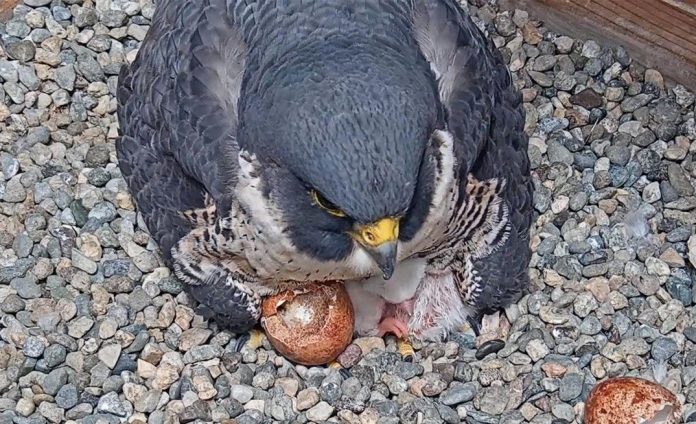 Ugh! The drama seemed to have passed and all was back to normal for the bonded pair of peregrine falcons who have been mating and residing atop the UC Berkeley Campanile. But no!

Back in November, the male half of the pair, Grinnell, was injured in an apparent territorial fight with two other falcons. His mate of five years, Annie, started taking up with another male, and the pair appeared to be going through some courtship behavior. But then Grinnell returned within a couple of weeks to the Campanile, and by New Year’s he and Annie appeared to be doing the courtship dance again.

Now, though, eight-year-old Annie has mysteriously vanished. With many eyes (and cameras) on this particular falcon nest, falcon watchers tell Berkeleyside that Annie hasn’t been around the nest for at least a week. And that absence likely means she was injured in a fight like her mate, or injured or killed while hunting for a meal — which she was often seen doing in downtown Berkeley.

Grinnell, when he was injured, was quickly spotted atop a garbage can on Halloween weekend and taken for treatment at a wildlife rescue. So far, though, no rescues have had reports of Annie turning up injured, and the group keeping tabs on the nest, Cal Falcons, is bracing for the worst, and expecting her not to return.

Already, given what apparently prime real estate that Campanile nest is, female “floaters” have been dropping by seeking out nests of their own, and Grinnell has not been chasing them off — though he’s been known to chase off larger females in the past, per Berkeleyside.

Annie and Grinnell have consistently occupied and defended this territory since producing their first brood together in 2017, but bird watchers say this day was inevitable, and good things don’t last forever in the bird world.

Annie would usually have laid her eggs in the month of March.

“If a new female falcon comes in, we hope that she would be receptive to mating with Grinnell, but that’s up to the birds,” says Sean Peterson, a Cal Falcons ornithologist, in a statement to Berkeleyside. “He will likely try to stay at the territory, so he will probably only leave if driven off by a new female or another male competing for the territory.”

“It’s incredibly difficult to say goodbye to Annie,” the Cal Falcons group writes on Twitter. “She was a wonderful mother and raised 13 chicks in five broods. We are heartened, though, that there are already new falcons exploring the Campanile, a testament to how well they’ve recovered from the brink of extinction.”

We are going to miss Annie immensely, but we are so grateful for the five years we got to spend with her and her chicks. pic.twitter.com/tHWJrVp3Jb

During the pandemic, local falcon cams became a bit of an obsession for some, including us at SFist. One falcon cam that had been operational for over a decade atop PG&E’s headquarters in downtown SF was taken offline last year, not long after the falcon pair there successfully raised four chicks into fledglings last spring.

Annie and Grinnell also had a brood of three chicks last spring, which were given the names Fauci, Kaknu, and Wek’-Wek’, with the latter two names being falcon figures from Native American traditions.