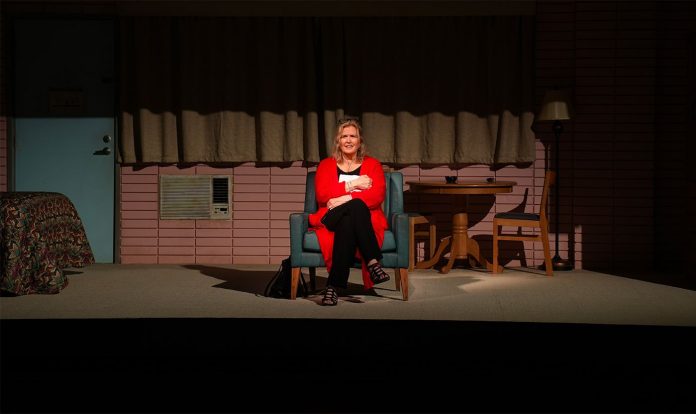 ‘Dana H.’ at Berkeley Rep Is a Haunting First-Person Portrait of an Abduction and Its After-Effects

Lucas Hnath’s play Dana H. is not really a play at all. It is a tribute, and a reckoning of a sort, as well as an act of love for his mother that is tinged simultaneously with regret and great admiration.

Dana H. premiered on Broadway last fall and ran only a brief six weeks after premiering off-Broadway in early 2020. It’s original main performer, veteran TV and film actor Deirdre O’Connell, is nominated for a Tony Award this season — and she’ll find out if she wins on Sunday. That is significant because while this is a piece that requires an intense amount of memorization and acting chops, audiences never heard O’Connell’s voice.

The same is true of the main performer in the Berkeley Rep production, which opened Thursday night and stars another theater, film and TV vet, Jordan Baker. Like O’Connell, Baker lip syncs the entire performance, lining up her every chuckle and sigh to the voice of Hnath’s real-life mother, Dana Higginbotham. The entire show, save for a dramatic interlude involving light effects and a sound collage, consists of edited pieces of interviews conducted with Higginbotham by Hnath’s friend, Steve Cosson, in 2015. (Cosson is the founding artistic director of The Civilians, a theater company that specializes in “investigative” theater based on real stories.)

While Hnath was in college in 1997, Higginbotham, back in Orlando, was going through a divorce. She worked as a chaplain in a psychiatric hospital, and it was there that she met Jim, an at-first-sympathetic ex-convict and member of the Aryan Brotherhood who had spent little of his adult life outside of a prison cell.

When Jim was discharged around Christmas, Higginbotham generously let him come home with her. She then helped him find an apartment. Shortly thereafter, he abducted her and took her on a whirlwind, meth-fueled crime spree back and forth across the Southeast for five months, forcing her into the role of accomplice as he did various dirty work for white-supremacist and underworld allies, physically and sexually assaulting her along the way.

Baker does an incredible job assuming the speech rhythms and imagined mannerisms of Higginbotham as she candidly, matter-of-factly tells her tale as best as she remembers it — she says multiple times that her memory consists of a lot of “snapshots” and she still has trouble remembering the order of things. And it’s a devastating piece of theater, an unholy offloading of horrific events in which the world seemed to conspire to ignore this obviously battered middle-aged woman — Higginbotham recounts multiple instances in which her kidnapper easily talked his way out of confrontations with the police, and they did nothing to save her.

Higginbotham lived to tell the tale, obviously, but her physical and psychological wounds are described in wrenching detail. The only upside being that such horror, and the frequent feeling that her death was imminent, has probably helped in her ongoing work as a hospice chaplain.

The choice to use her voice, and the audio of these interviews, instead of writing this as a one-woman show, feels like an act of contrition — the enormous question hanging over the story being where was her family, her son, through all of this, and how was she not missed? And perhaps with material so personal, and so traumatic, it seems only right and honorable to hear it from the woman herself — an actor reading re-written, edited lines would cheapen it somehow, and would not do justice to the raw pain of the experience.

It also captures all of the halting, self-effacing, authentic things about a person’s speech when they’re telling a story this difficult about themselves, trying to make sense of it as they explain it to others, never having fully explained it to themselves.

The structure of the interview edits, at least, offers a slight redemptive moment by the end. But sorting through another person’s trauma like this, letting it crash over you like a sneaker wave, is not for the faint of heart.

Facebook
Twitter
Pinterest
WhatsApp
Previous articlePeaches Christ’s ‘All About Evil’ Has Anniversary Screening Saturday, Plus Blu-Ray and Streaming Release
Next articleDay Around the Bay: Person Fatally Struck by Amtrak Near Berkeley’s Aquatic Park