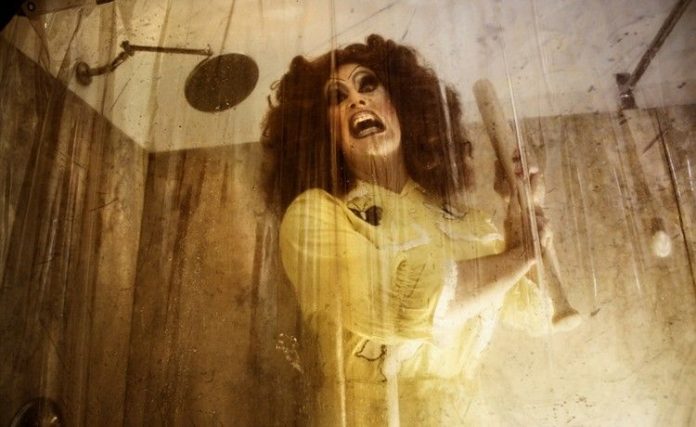 Peaches Christ’s ‘All About Evil’ Has Anniversary Screening Saturday, Plus Blu-Ray and Streaming Release

The 2010 drag queen slasher flick All About Evil was largely shot at SF’s Victoria Theatre, and will screen there Saturday night with Peaches on hand, as the resurgent cult film arrives on Blu-Ray and streaming this weekend too.

We would like to think that the cultural resurgence of actor Natasha Lyonne, who recently hosted the season finale of Saturday Night Live and has scored Emmy nominations for her performances in Russian Doll and Orange is the New Black, has everything to do with her “comeback” performance in Peaches Christ’s 2010 low-budget splatter flick masterpiece All About Evil. As All About Evil is set for a special edition anniversary screening Saturday night at the Victoria Theatre, Peaches Christ herself was asked whether the film could be credited with igniting Lyonne’s newfound blockbuster success.

“I can take absolutely no credit for the release of season two of Russian Doll or Natasha hosting Saturday Night Live,” Peaches’ real-life alter-ego Josh Grannell told the Chronicle. “What I can take credit for is being stubborn.”

And hey, do we have a new trailer for the anniversary? We do!

As Broke-Ass Stuart explains, this weekend is all about All About Evil: The 2010 schlock-camp horror film arrives on Blu-Ray today, has a star-studded anniversary screening Saturday night at the Victoria, and then arrives on streaming Monday on a platform called Shudder.

This is one of those 10th anniversary celebrations that couldn’t happen until the 11th anniversary, because of COVID-19. If you didn’t see this film in its original theatrical release, Lyonne plays a librarian who inherits the financially strapped Victoria Theatre, and revives the theater house’s fortunes with deadly results. There are cameos galore, including “Elvira” (Cassandra Peterson), frequent John Waters co-star Mink Stole, plus local drag notables Heklina, Putanesca, Martiny, and of course Peaches Christ herself.

Saturday night’s show at the Victoria will also feature a pre-show performance by Trixxie Carr as well as Peaches Christ and the Midnight Mass Players — plus, naturally, a Q&A moderated by Michael Varrati following the screening. While Natasha Lyonne is not expected to attend, a number of the film’s co-stars are expected to be on hand.

Related: In Honor Of Showgirls! The Musical!, Drag Star Peaches Christ Gets Ice Cream Named After Her [SFist]

Facebook
Twitter
Pinterest
WhatsApp
Previous articleHadestown Opens In San Francisco, Embuing a Tragic Tale With Moving Songs and New Orleans Jazz
Next article‘Dana H.’ at Berkeley Rep Is a Haunting First-Person Portrait of an Abduction and Its After-Effects