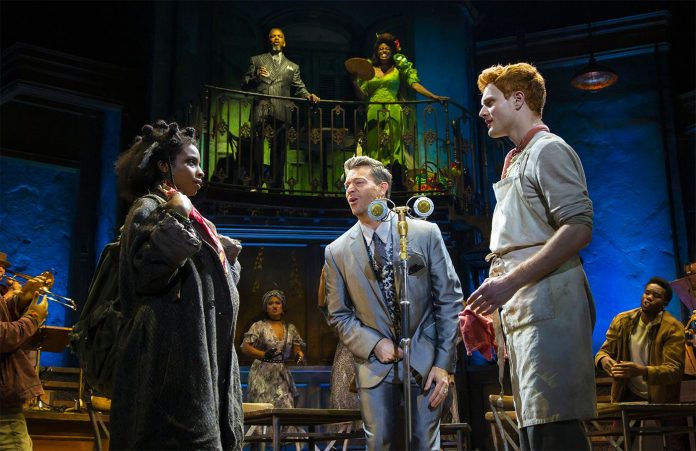 You are likely familiar with the tale of Orpheus and Eurydice, the tragic lovers whose escape from the Underworld of ancient times is thwarted by the specter of distrust, and a classic, devilish test of myth. With Hadestown, the Tony-winning musical that has finally made it on tour and landed in San Francisco, the myth becomes fodder for music and metaphor, and Greek tragedy never sounded so melodic and bittersweet.

For the purposes of the musical, and this unique telling of the myth, the Underworld of Hades becomes Hadestown, and it’s a sweltering factory floor buried somewhere beneath a raucous street in New Orleans where music is always playing. (The set design by Rachel Hauck centers us squarely in NoLa and that transforms well into a spooky netherworld of furnaces.) Persephone — played here with terrific energy and nuance by Kimberly Marable, who also boasts an amazing singing voice — is a put-upon wife and queen who only gets to live in joy and pleasure for half the year, emerging back on Earth in the spring with bottles of hooch in her flower-covered picnic basket. Orpheus is a wide-eyed poet and songwriter, waiting tables by day and making magic with his lyre (actually an electric guitar) at night. And in a not-too-subtle nod to Rent, Eurydice is a fellow bohemian, an urchin in a ratty coat hungry for romance but hungrier still for real sustenance and security.

Kimberly Marable as Persephone in the North American Tour of ‘Hadestown.’ Photo by T. Charles Erickson

Hades, played by Kevyn Morrow, is a demanding task-master and intimidating bass against the melodic chorus of voices, who somewhat convincingly takes on some human vulnerability by the end of the tale.

The Fates (played terrifically here by Shea Renne, Bex Odorisio, and Belen Moyano) are a trio of conniving gossips in severe makeup and 1920s outfits who hover around the action and harmonize gorgeously with a mixture of warnings, taunts, and advice.

Hermes, meanwhile, is the suave and charismatic narrator and bandleader — played in this production by Levi Kreis, a Broadway vet with singing chops who won a Tony Award in 2010 for his portrayal of Jerry Lee Lewis in Million Dollar Quartet. (The role of Hermes also won a Tony for its originator, Andre de Shields, who continues in the role today on Broadway.) This entire story, Hermes tells us, is a “sad song,” but it’s one that has to be told anyway, and along the way it is jazzed up and lightened by a very beautiful telling.

As Orpheus and Eurydice, Nicholas Barasch and Morgan Siobhan Green are well matched vocally, and Barasch in particular powers through some incredibly difficult music in a very high vocal register with seeming ease. While their songs are all heartfelt and legitimately moving, the characters are written fairly two-dimensionally and without much specificity or chemistry to their attraction — which is a shame as the centrality of their love and our belief in it is vital to the drama of the piece.

Hadestown was conceived by singer-songwriter Anaïs Mitchell, who says she was obsessed with the Orpheus and Eurydice myth since childhood. Not long after graduating from Vermont’s Middlebury College, Mitchell composed the original version of her “folk opera” called Hadestown, and began touring it around Vermont in 2007 playing the role of Eurydice herself. This gave way to a concept album, with friend and mentor Ani DiFranco singing the role of  Persephone and Bon Iver/Justin Vernon singing the role of Orpheus. And ultimately, after adding 15 new songs, the show landed off-Broadway at New York Theater Workshop in 2016, directed by Rachel Chavkin (who directed the Tony-winning Natasha, Pierre & the Great Comet of 1812).

The show was revised, rearranged, and tightened further in out-of-town tryouts in Edmonton and London before landing on Broadway in 2019 and taking home the Tony Award that year for Best New Musical.

The show remains, perhaps, a bit disjointed in the way of a work in progress, with at least two or three superfluous songs that leave the piece languishing a bit in the middle — we all know, after all, where the story is going, and getting there takes a touch too long.

But it’s nonetheless a beautiful and original piece of theater, working through a myth that takes on some new metaphoric angles vis a vis immigration — there’s a song called “Why We Build the Wall” about keeping out the less fortunate in Hades, which is hard not to hear in the context of Donald Trump even though its writing predates his campaign — late-stage capitalism and climate change.

The toiling workers in Hades are depicted as dead-eyed and numbed, able to keep up their slavish tasks by being wholly uninterested in the world beyond their immediate existence. And the spring verdancy that Persephone brings is depicted as missing or too brief in the first act, with some implication that the environment itself has gotten out of whack.

It’s the songs, though, that keep Hadestown afloat, and it’s easy to take in the show and immerse yourself in the harmonies while staying blissfully unaware of these deeper readings.

Orpheus messes everything up by being all to frail and human, turning back to check if his love is still following him, and banishing her to Hades forever. But the deal that Persephone is forced to take, spending half her year in darkness with a god who ostensibly loves her, it’s perhaps a fair trade so that the rest of us can have constant cycles of rebirth and basking in the sun when she returns. That part is hopeful, at least.

‘Hadestown’ plays through July 3 at the Orpheum Theater. Get tickets here.

Facebook
Twitter
Pinterest
WhatsApp
Previous articleBernal Rock Gets Painted Purple and Glittered Up for Prince’s Birthday
Next articlePeaches Christ’s ‘All About Evil’ Has Anniversary Screening Saturday, Plus Blu-Ray and Streaming Release