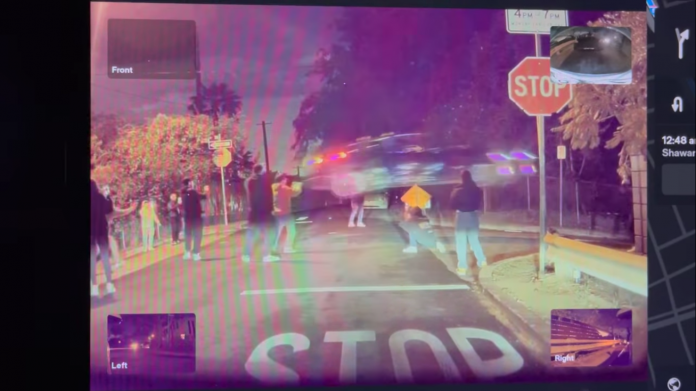 In a hit-and-run fiasco that a crowd of Tesla fans clearly delighted in, a Tesla owner in L.A. performed a massively dangerous 50-foot leap on city streets, and damaged a few other cars with this stupid stunt.

To many of us older folk who spent previous decades dreaming that eventually there would be electric cars, the advent of this technology has had a real Monkey’s Paw effect in how the most popular version of these cars appeals to such an entitled asshole subset of car owners. After SFist broke a story last spring about a guy sitting in the backseat of his Tesla in autopilot mode, someone else just shifted the “detestable Tesla driver” stereotype to a whole other gear.

As KTVU reports, a Tesla driver in what appears to be the Echo Park neighborhood of Los Angeles did a 50-foot jump in his Tesla, and did serious damage to other cars parked on the street.

YouTuber Alex Choi, who organized a Tesla rally that night, did the influencer thing where he took what could have been a brief video and made it ten minutes long (seen above). “What you’re about to see today is extremely stupid, very, very dangerous, I mean, people could have been fucking killed today, they are so lucky to be alive,” Choi’s video says at its introduction. But there is otherwise very little remorse in this fanboi video that eventually gets to the jump at the 1:42 mark.

Someone decided to jump a Tesla on Baxter St in Echo Park, LA. pic.twitter.com/LS1oMtNEcY

If you’d rather not give him the YouTube views, above is a brief video of this terribly ill-advised maneuver.

While Choi himself is seen pulling some wreckage from the streets after (“Here’s a radiator fan”) it is frankly remarkable how a group of gathered Tesla enthusiasts film the whole thing on their phones, and then just all scatter when it is obvious something bad has happened.

You know that viral video of the Tesla jump yesterday? Well, he wrecked into this man’s Subaru.

He says the cops are not pressing felony charges. https://t.co/AgHIwiE9tF pic.twitter.com/VELvq6GoMI

As a footnote to all this, one of the people whose car was wrecked by this yet-unknown asshole now has a GoFundMe to help with his unfortunate new need for car repairs. “Although this guy claims in his video that my car didn’t sustain major damage, this isn’t true,” victim Jordan Hook complains. “My wheels were turned in towards the curb, and when the Tesla hit my car it jumped the curb, wrenching the wheels under and twisting them up so that it is now un-driveable.”

Choi himself then submitted a copyright complaint to YouTube over the victim using bits of Choi’s video in his crowdfunding appeal. So the crowdfunding video is now disabled, but the guy has raised nearly $10,000 for repairs in about 24 hours.