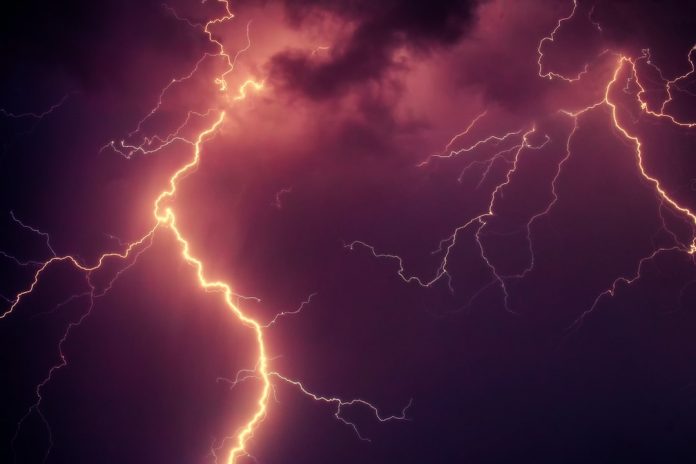 Early Monsoons In Southwest Bring Possibility of Thunderstorms In NorCal

Moonsoonal moisture is on its way over California this week, which will bring the possibility of some light rain, and also, more ominously, lightning in some already fire-prone areas.

Everyone here will recall the apocalyptic summer of 2020, when lightning-sparked wildfires consumed huge swaths of our region — all of which began during a mid-August spate of monsoonal moisture coming from the south. The weekend saw some early monsoon-season rain in Arizona — which the whole Southwest desperately needs, as their drought conditions are even worse than ours in some spots. But that moisture moving up over the California coast brings the potential for dry thunderstorms, and only a little bit of potential for actual precipitation for the Bay Area.

The National Weather Service is warning of possible lightning-ignited fires between Wednesday and Thursday, and they say that the Bay Area and Central Coast are the areas of greatest concern.

As we deal with heat across the Bay Area and Central Coast today, we are monitoring monsoonal moisture approaching from the SE. This pattern supports the potential for isolated dry thunderstorms from Wednesday into Thursday. Main threat: lightning-ignited fires! #CAwx #BayAreaWX pic.twitter.com/Uc6Sc5uHYq

Periods of monsoonal moisture came our way in August and September of 2021 without any major lightning incidents, but the memories of two years ago are still pretty fresh.

And it seems like not that long ago, lightning was an exceedingly rare occurrence around the Bay, but starting around 2017 we’ve seen a few more summertime lightning storms, including this one in September 2017 where a photographer captured lightning striking Salesforce Tower.

Meteorologist Daniel Swain says the wetter areas for this weather system are likely to be in the Southern California mountains, and dry thunderstorms are likelier in the Central Valley and closer to us.

Sarah McCorkle, a National Weather Service meteorologist, tells the Chronicle, “The Bay Area itself won’t get a whole lot from this,” but parts of the East Bay and North Bay could see a bit of moisture starting late Wednesday. And lightning tends to be fairly difficult to predict.

Meanwhile, San Francisco is having a heatwave day, with temperatures expected to hit highs in the 80s today. But this is forecast to be the last super warm day in the city this week, with the rest of this week seeing part sun and average temps around 65 degrees.

Facebook
Twitter
Pinterest
WhatsApp
Previous articlePhotos From the Warriors’ Victory Parade Up Market Street In San Francisco
Next articleCongress Steps In to Save Sequoia Trees, As Nearly 20% Have Been Killed By Wildfires