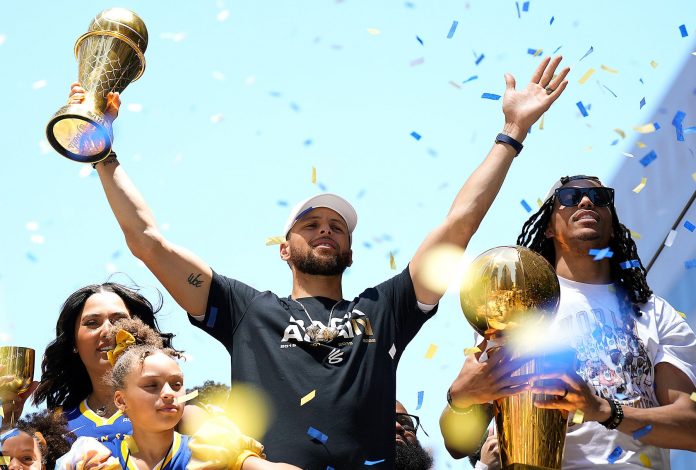 Public Works will be cleaning up that blue and gold confetti for weeks, after a million fans came and were showered with about a million pounds of the stuff, alongside the Golden State Warriors and the team brass.

There were some familiar parts to the ritual, with this being the Warriors’ fourth championship and fourth victory parade in eight years — though the previous three were in Oakland. Draymond Green talked some shit for the cameras, Steph Curry and his wife Ayesha rode in an open-topped bus with their kids Riley, Ryan, and Canon — who at nearly four years old was seeing his first victory parade for dad. And Klay Thompson wore his boat captain’s hat because his championship ballcap blew off into the Bay while he was boating in to the city this morning.

But there were also some new members of the squad like Gary Payton II — who showed off his tatted up torso for the crowd — and Jordan Poole for whom this was their first championship victory parade.

Some fans near the foot of Market Street threw their own “Poole Party” for Jordan, and he stopped to throw a couple of three-pointers into the basket that appeared to be sponsored by nearby Lark Bar.

Below, some more photos from the day, via Getty Images.

Ayesha and Steph somewhere in there. Photo by Thearon W. Henderson/Getty Images