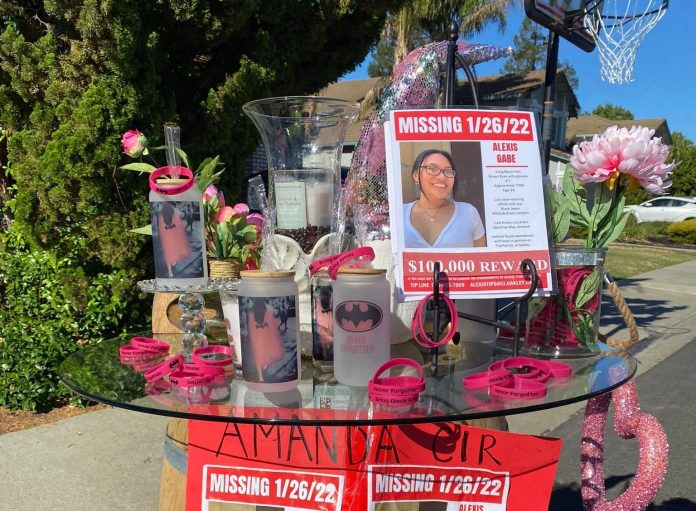 A chilling new development in the case of missing 24-year-old Oakley woman Alexis Gabe, as police have found a handwritten letter from her suspected killer detailing where he planned to hide her body.

It’s now been more than five months since Oakley woman Alexis Gabe has gone missing, after her car was found abandoned on a dead end street with the keys still in the ignition. Bits of evidence have surfaced since; her phone case was recovered in May, and shortly thereafter, video of a suspect led Oakley police to issue an arrest warrant for her ex-boyfriend Marshall Curtis Jones. Jones was located in the Seattle area on June 2, but he was shot and killed when he lunged at law enforcement officers with a knife.

None of this has brought any comfort to these excruciatingly difficult five months for Gabe’s family. And the latest piece of evidence is even less comforting, but could eventually lead to some closure on this ongoing case. KTVU reports that police have found a handwritten letter from Jones detailing where they suspect he intended to dispose of her body.

The cryptic directions in the notes were specific – detailing left and right turns with specific time estimates that ended on a rural road in the Sierra foothills up in Amador County. https://t.co/xrVVB0Cw5e

The family has chosen to make this information public. They’ve posted to Facebook a letter from the Antioch police department, saying they found the letter crumpled in the trash at Jones’ sister’s residence. “We know that Marshall Jones wrote these directions to Pioneer [California] and believe he used them to dispose of Alexis’ body near where the directions end,” the letter from police says.

The family has also chosen to post the Jones’ handwritten letter itself, which does not name Gabe specifically, but does contain very specific directions to a remote area in Pioneer, CA, a small town some 30 miles east of Sacramento.

The directions are not specific enough to pinpoint a certain place. But Amador County search and rescue personnel, and hundreds of volunteers, did search the areas seen below over the weekend.  The search team also drained a reported eight million gallons of water in local ponds, but they’ve found nothing yet.

“The only other area that needs to be searched is the forest area. And it’s too difficult to do for the nonprofessionals,” Gabe’s father Gwyn Gabe said at a weekend press conference. “It’s really tough. There’s poison oak. there’s snakes, there’s a bunch of stuff, it’s really dangerous.”

But KGO adds the family is still hopeful that Alexis Gabe may have survived the ordeal. “In our hearts, until we find a body, we remain hopeful,” the father said, according to that station.

If you have any information about this case, you’re asked to call the Alexis Gabe tip line at 925-625-7009. There is also a GoFundMe to support Gabe’s family.

Related: Ex-Boyfriend of Alexis Gabe Killed By Police While They Were Attempting to Serve Arrest Warrant for Murder [SFist]