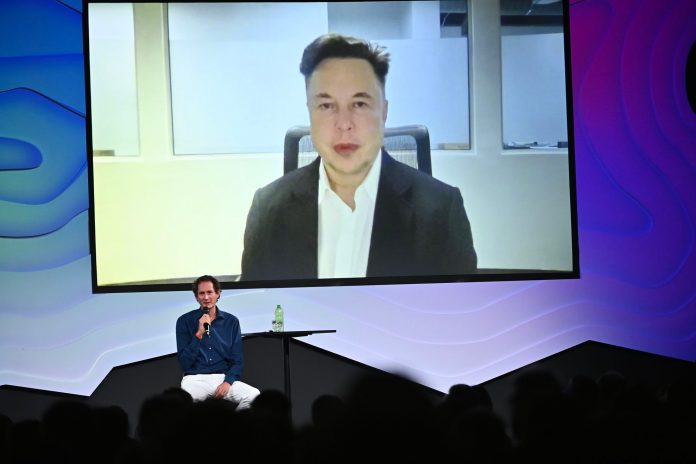 Welp, we have our answer as to whether Elon Musk’s commitment to freer speech on Twitter extends to former President Donald Trump. So even though Musk claims to want what’s good for democratic society, he’s happy to hand the megaphone back to the man who’s bent on destroying it.

In comments on Tuesday made at a Financial Times conference and reported on by the New York Times, Musk made clear that he intends to reverse the permanent ban on Donald Trump at Twitter, which was put in place in the wake of tweets that were seen as inciting the riot that occurred at the Capitol on January 6th, 2021.

“I do think it was not correct to ban Donald Trump, I think that was a mistake, because it alienated a large part of the country, and did not ultimately result in Donald Trump not having a voice,” Musk says — apparently misunderstanding the enormous power that the deplatforming of Trump has had in not allowing him to amplify his lies about winning the election, etcetera, for the last seventeen months.

Musk says he thinks that suspensions are appropriate for people who say things that are illegal “or otherwise just, you know, destructive to the world,” but he says that banning Trump was “morally wrong and flat-out stupid.”

Flat-out stupid! Right, so we have a libertarian billionaire, who also by the way thought that pandemic lockdowns were stupid and openly defied them to make sure his Tesla assembly line could start up again, who is making clear that in his new fiefdom of Twitter, we can go right back to the democracy-damaging bullshit as soon as he’s back in charge.

It’s been clear — at least to this writer — that Musk wanted to buy this company in large part because he’s addicted to tweeting and thinks everyone else should be too, and not because he had some terrific, polymath-genius notions for how to make it better for society. In the libertarian view, it’s always going to be about fewer rules and fewer guardrails, because fuck it — if people want to destroy themselves or believe in conspiracies that undermine our government and every future election, that’s their right. It’s an ideology that believes in freedoms above all else, and doesn’t always consider the poor, vulnerable, or those less able to parse truth from fiction, because that’s too complicated. It’s an ideology that’s hellbent on individualism at almost any cost, not the collective good.

When it comes to permanent bans on social media, Facebook’s Oversight Board reached a similar conclusion to Musk, saying last May that in the case of Donald Trump, there needed to be some finite end to the suspension, and clear rules about when and for how long public figures can be suspended for such behavior in the future. Facebook responded by saying that Trump would be suspended for two years, which means he gets his Facebook account back next January, and will keep it pending good behavior.

The always disingenuous Trump made a comment on Fox News last month that he was going to stick with the clearly sinking ship that is his nascent Twitter copycat Truth Social, and that he wouldn’t go back on Twitter even if he were allowed. That’s of course bullshit, because if ever there was a human being who couldn’t resist a daily potential audience of 80 million followers, it is Donald J. Trump, and he will dump Truth and get back to tweeting faster than you can say FAKE NEWS, mark my words.

Who else will Musk reverse bans on? Will this just be the heyday for the far right again, with everyone getting their Twitter accounts back so Parler can just shut down too? How the fuck does Musk think Twitter is going to reach its revenue goals, ad-wise, if it just becomes a cesspool of racism, sexism, doxxing, and QAnon crap again?

Remember that time that Musk politely asked a teenager to remove a bot that was publishing the location of his private jet on Twitter and the kid refused without payment? That isn’t illegal. But I bet he wouldn’t mind permanently banning that kid!!