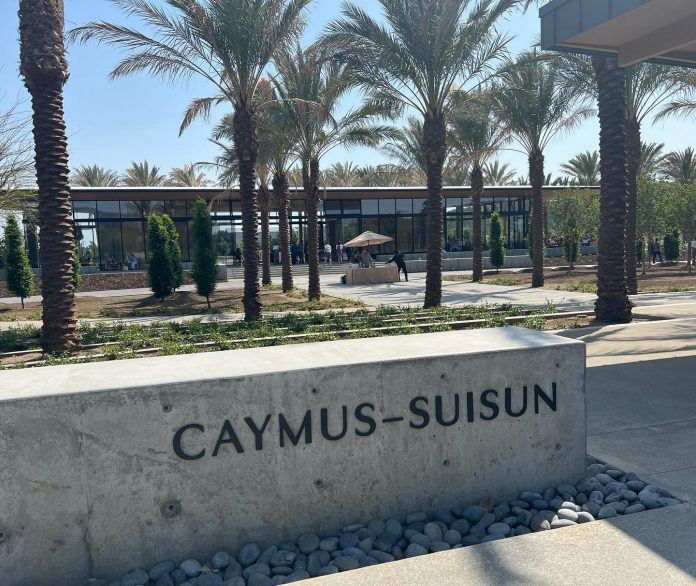 A little-recognized region just got a big new wine attraction, as the family behind prestigious Napa brand Caymus has opened a luxe outpost in Suisun Valley, with an Apple Store-esque design and a retro cassette-tape room.

I was surprised to learn just today that Suisun Valley is a designated American Viticultural Area (AVA), a geographic pedigree given to certain regions for the distinctiveness of their wine grapes. In fact, that region (which is kind of better known for a state prison and Travis Air Force Base) is the second-oldest AVA in California, the oldest being Napa. But the very few, mom and pop-style wineries and tasting rooms in Suisun Valley just got a splashy new addition, as the Chronicle reports that famed Napa wine brand Caymus just opened a “mega tasting room” in Suisun Valley.

Caymus initially went to Suisun because they found a big facility where they could make a lot of wine. But now they're going all in. The new tasting room feels like a resorthttps://t.co/Z43BVesID2

“Designed by Bohlin Cywinski Jackson, an architecture firm behind Apple Store and Blue Bottle Coffee locations, Caymus-Suisun almost feels like a resort, with floor-to-ceiling glass walls and a promenade of palm trees,” Chron wine critic Esther Mobley writes after a visit to Caymus-Suisun Winery, which appears to have opened in the first days of May.

You can see some renderings of Caymus-Suisun Winery and tasting room from the architecture firm Bohlin Cywinski Jackson, which feature floor-to-ceiling windows. Per the Chronicle, it has a luxe tasting room that seats 150, and a private area for events “complete with leather swinging chairs on a secluded deck.” And “as a nostalgic touch,” that private room sports an old tape deck and “a collection of cassettes (the room gets too much sun for vinyl records).”

The place has a reasonable-by-Napa-standard $25 tasting fee, though that’s waived if you buy bottles — you should know that Caymus Cabernets tend to start around $400, but Caymus-Suisun Petite Sirah is retailing for just $40. And they also let you pick some free produce from the surrounding farm if you please. Tellingly, the Chron notes that “visitors will be routed through a wine retail room” on the way out, so you’re kind of prompted to buy wine. There’s also an espresso bar serving Camellia Roasters coffee on the way out, which is complimentary with your admission or wine purchase — something that’s customary at Australian wineries.

You would think the existing Suisun Valley wineries would not be happy that the bigger and more prominent Wagner family with their famed Cymus brand has muscled in. In fact, they are thrilled.

“We’ve been waiting for this our whole lives,” nearby Tolenas Winery owner Lisa Tenbrink Howard told the Chronicle. The Chron adds that reps for several other Suisun Valley wineries all “expressed optimism that the Wagners could raise their collective profile.”

And the Wagners do have quite the Napa profile. The Wagner Family of Wine are Napa legends, and while they do also produce brands Emmolo, Mer Soleil, and Conundrum, their flagship brand Caymus has a Special Selection Cabernet that has the exceedingly rare distinction of winning Wine Spectator’s Wine of the Year twice.

That said, they have other curious distinctions. Patriarch and vintner Chuck Wagner has been a vocal critic of California and Napa regulations, and sued Governor Gavin Newsom in 2020 for not allowing non-essential businesses like tasting rooms to reopen. Wagner has also been dinged within a $1 million fine for producing more wine than his Napa permit allowed. The expansion to Suisun Valley may be driven less by terroir, and more by Solano County’s looser restrictions that permit hard liquor at tasting rooms, allow weddings at wineries, and other amenities that Napa generally prohibits.

Whatever the motivation, though, it’s great to see more investment and development in Solano County. You know, rising tides and all that jazz, it will help the California economy to have another renowned wine region. If you’re game, the tasting room is now open daily 10 a.m. to 5 p.m., though as they say on their website, “Reservations are strongly encouraged – Please schedule your tasting.”

Facebook
Twitter
Pinterest
WhatsApp
Previous articleElon Musk Will Let Trump Back on Twitter, Saying Permanent Bans ‘Fundamentally Undermine Trust’ In the Platform
Next articleIt Was Ugly, But the Warriors Pulled Out a Game 4 Win Over Memphis to Take a 3-1 Series Lead