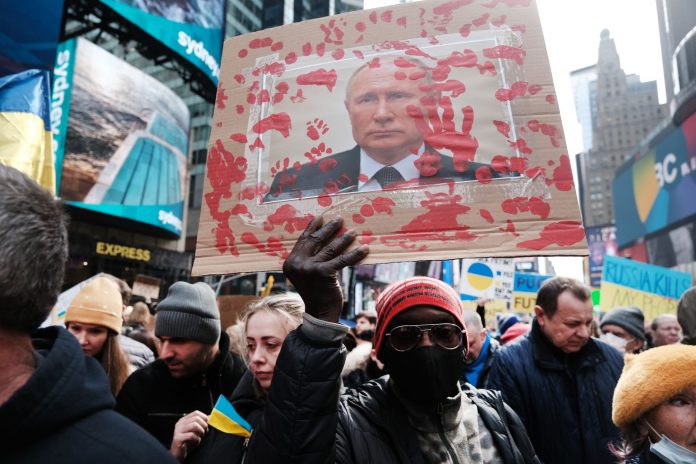 Facebook Relaxes (and Then Reverses) Its Rules Over Calling for Leaders to Be Killed, Because of Putin

Meta made a Putin-specific change to its policy on calling for the assassination of world leaders late last week, then backtracked today for ill-explained reasons.

As the Russian invasion of Ukraine was dragging into its third week, Facebook’s parent company Meta declared a new policy last Thursday that immediately infuriated the unholy Tucker-Carlson-far-right and Glenn Greenwald-far-left alliance. As New York Magazine reported at the time, Facebook (slightly) reversed its policy on incitement of violence, and decided to allow users to call for assassinations — but only if you called the the killing of Vladimir Putin, or his counterpart, Belarusian president Aleksander Lukashenko. Being Facebook, the new policy was so incremental as to be meaningless, because it only applied to users in Ukraine or Russia, it could only be the above two-named leaders, and the post would be removed if it contained “two indicators of credibility, such as the location or method” of assassination.

Liberals are praising Nazis to own Putin. And Facebook is here for it. pic.twitter.com/2wlBJuO3Dd

Expectedly, the Julian Assange wing of the left declared this to be barbaric enabling of whatever Ukrainian Nazis they think exist, and imagine to be engaged in resistance against the Russian invasion. The Russian government predictably declared the same, labeling Facebook as an extremist organization (Russia had already banned Facebook last week), and now cutting off access to Instagram.

And then on Monday, showing that classic Mark Zuckerberg spine and resolve, Facebook completely reversed its policy and decided you can’t call for Putin’s assassination. Or in the words of a paid Meta spokesperson with millions of dollars in vested stock options, they “clarified” that they were “narrowing the focus” of that policy.

“We are now narrowing the focus to make it explicitly clear in the guidance that it is never to be interpreted as condoning violence against Russians in general,” Meta global affairs President Nick Clegg “These are difficult decisions. Circumstances in Ukraine are fast moving. We try to think through all the consequences, and we keep our guidance under constant review because the context is always evolving.”

I suppose these are interesting policy decisions with an evolving world and all, but it is farcical to think that someone will get Vladimir Putin assassinated with a Facebook post. People can (and will) get bent out of shape over whether this makes Facebook complicit to murderer or an arbiter of justice, but this is all seems more like parlor-game conversation.

Tucker then brought on Glenn Greenwald, who he described as "an expert on detecting deception." (lol) Glenn immediately echoed Carlson's distorted claims about the US government and biolabs in Ukraine. pic.twitter.com/pCq62O0yi5

There is a far more meaningful and troubling problem on Facebook with the U.S. bioweapon-lab-in-Ukraine hoax, which has spread so much on social media that it’s made in onto Tucker Carlson’s show. This is surely far more of a threat than individual yahoos calling for Putin’s assassination. But if you’re a Meta employee with millions of dollars in vested stock options, you’d rather people be talking about the latest hair-splitting with your policy on posts calling for the assassination of world leaders.

Image: NEW YORK, NEW YORK – MARCH 05: Hundreds of people gather in Manhattan’s Times Square in support of Ukraine and to demand an end to the Russian invasion of the country on March 05, 2022 in New York City. As the war moves into its third week, hundreds of civilians have been killed as Russians continue their bombardment of key cities and towns. (Photo by Spencer Platt/Getty Images)