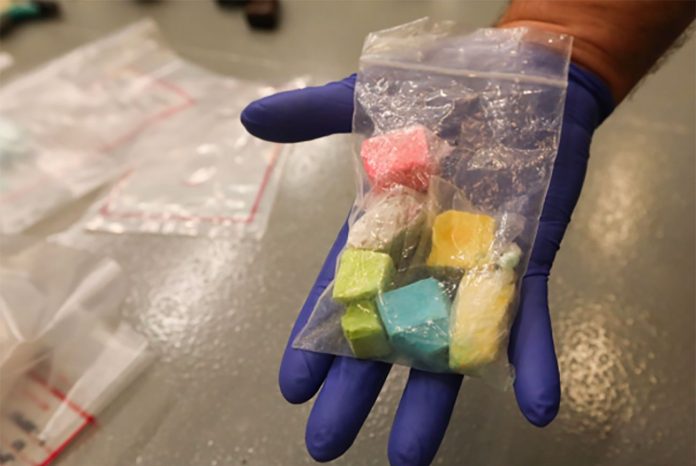 There’s some candy-colored, “rainbow fentanyl” now circulating out there, and federal authorities issued a warning that the deadly drug may be being marketed more to kids.

It should be noted that the warning issued Friday by the U.S. Attorney’s Office came from the District of Oregon, and the fentanyl in question was taken off the streets of Portland. But the feds say they have now seen this fentanyl, which “resembles thick pieces of brightly-colored sidewalk chalk,” in “two notable seizures in the last several days” in Portland, which has raised alarms because it’s new and novel.

“Fentanyl is the deadliest drug threat we face today,” says DEA Acting Special Agent in Charge Jacob D. Galvan from the Seattle Field Division in a statement. “It doesn’t matter what color, shape or form it comes in; just two milligrams of fentanyl — the equivalent of 10 to 15 grains of salt — is enough to kill someone.”

Galvan added that the DEA’s Portland Office has been “seizing record amounts of fentanyl” recently.

The feds’ alert led to the district attorney in Placer County, CA to issue his own press release, as KRON4 reports. DA Morgan Gire said that fentanyl was now being sold via TikTok, Snapchat, and elsewhere on social media, and that it may be found in “fake prescription pills, off-market vape pens and [it is] even being reported to be found in marijuana.”

“Fentanyl has changed the landscape — what was once considered harmless experimentation can lead to death,” Gire said in the release. “Kids trying pills they believe are something else are dying the first time and it is absolutely devastating.”

It’s not clear if this “rainbow fentanyl” is being marketed as just fentanyl or under some new name. But the U.S. Attorney’s Office shared photos from recent seizures that indeed show some chunks of the drug that appear like candy.

“We want the community to know these multi-colored powders are one of the trends we are seeing in the fentanyl market,” Gire said.

The widespread sale and use of fentanyl on the streets of San Francisco has led to a worsening overdose crisis in recent years. Those overdoses are happening both in people knowingly taking the drug, and in cases where cocaine is purposely or inadvertently contaminated with fentanyl — as in the case of three friends who OD’d in a Mission apartment in March after using fentanyl-laced cocaine.