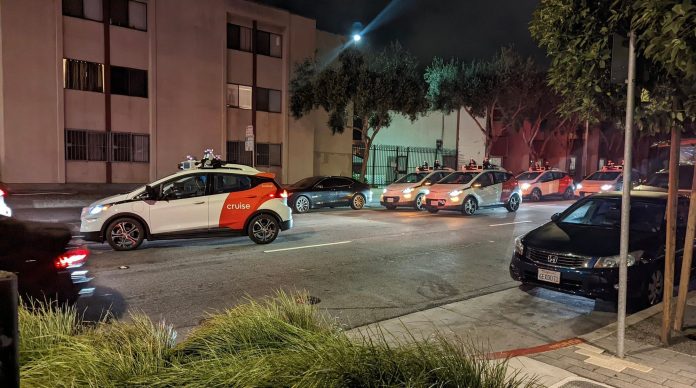 The latest self-driving car mishap comes courtesy of a cluster of GM Cruise driverless taxis that simply stopped in their tracks “for a couple of hours” Wednesday night and had to be manually pushed off the street by GM employees.

It was precisely six days into the era of General Motors’ self-driving Cruise taxis accepting paid rides that they had their first big clusterfuck. The GM Cruise self-driving taxis started giving free rides in February, but these were never intended to stay free, that was just a pilot program working at limited times in limited areas, ostensibly to work out the kinks.

Some @Cruise robotaxis appeared to be stuck in SF last night at the corner of Gough St. and Fulton St.

Human ops apparently had to rescue them. Still some kinks to iron out. pic.twitter.com/eXDocjVfHU

But the kinks are clearly not worked out. On the sixth day that these robotaxis were taking fares (actually sixth night, they only run between 10 p.m. and 6 a.m.), TechCrunch reports that “more than a half dozen” of them just stopped working and blocked the street “ for a couple of hours.” TechCrunch adds that GM “employees arrived and manually moved the autonomous vehicles.”

The incident was originally described in a Reddit post, but has since been confirmed by General Motors. The Reddit post, seen above, is entitled “Bunch of Cruise cars stuck on Gough by Robin,” with Robin being a reference to the omakase sushi place in front of which this bizarre incident occurred,

“The first thing I say to my coworker is that they’re getting together to murder us,” the Reddit poster said Wednesday. “It was a pretty surreal event. Humans had to come and manually take the cars away. Cruise should get fined to shit for blocking the street off for so long. They even made it so the street sweeper couldn’t hit an entire block.”

General Motors has since copped to the fact that yes, this strange occurrence did indeed occur. “We had an issue earlier this week that caused some of our vehicles to cluster together,” a Cruise spokesperson told TechCrunch. “While it was resolved and no passengers were impacted, we apologize to anyone who was inconvenienced.”

It’s the whole “cluster together” thing that makes this eerie, and certainly problematic. Like they actually ganged up and then stopped, and GM’s response kind of minimizes the problem here. That is a legitimate blocking of traffic, which could have caused some real emergencies. What if they all stopped working at once all across town? Given Tuesday night’s incident, that is no longer a far-fetched concern.

Oh sure, it was funny when the police pulled over the “Ain’t nobody in it!” robocar that was driving without its headlights on. That was also a Cruise vehicle, not the more commonly seen but similarly R2-D2 topped Waymo robot cars (which have also had their issues.) And we will have our laughs over this, but one cannot help but notice that GM doesn’t really have much of an action plan when these things go haywire, nor does the city of San Francisco or its public safety officials.